San Francisco Bay Area thrash metal veterans DEATH ANGEL have announced a fall 2019 North American headlining tour with openers EXMORTUS and HELLFIRE. The month-long trek will kick off on November 16 in Seattle and end on December 19 in West Hollywood.

Says DEATH ANGEL singer Mark Osegueda: "DEATH ANGEL is proud to FINALLY announce our first headlining tour in many years of North America!! We're doing this tour in support of our new album, 'Humanicide'! Supporting the ideals of the true thrash scene that we came from that supported the beliefs that kept the scene alive! That being said, we are extremely proud to present what we feel is a true modern-day thrash tour that represents the beliefs and foundation of what that amazing scene is and always has been based on!! Rebellion, truth, energy, camaraderie, and, most importantly, the music! This tour represents the roots through the evolution of what is this incredible genre, and scene we know as thrash!!!"

Guitarist Rob Cavestany told United Rock Nations about the inspiration for the album's title: "'Humanicide' is basically the self-extinction of the human race. It is very dark, in a kind of a dark time [with] the way that things are going around the world these days. It's no secret — all you have to do is turn on the news, go on social media, talk to somebody on the streets. You'll see that there's a bit of a problem going on between relations of humanity. It's hard to get away from it; it's ever-present. It's not like it's a brand new situation — of course, it's been going on, but the thing is, you see it more and more now because of social media... Everyone knows the same feeling. There's just a lot of tension happening, especially between the relations of humans. Our band has experienced this since we first started in the '80s, being that for one thing, we were all young and these Filipino cousins that didn't fit the normal look of the heavy metal band. We experienced harsh people all over the place for no apparent reason but because they weren't able to accept other people, or something other than what they think is how it's supposed to be, and that seems to be the problem persisting today. People are just thinking that whatever the way they do things or the way their particular scene is, that's how it's supposed to be everywhere else. They're not accepting of others, and it's getting really blown up in a bad way these days. The powers that be are not helping these situations — a lot of them aren't. This gives great inspiration for the kind of aggressive style of a concept that belongs in heavy music like this. You need to focus on some heavy topic one way or the other — it's not like singing about lying in the park in a bed of flowers having your Valentine date with you. This kind of movie that is presented in this genre is more of an intense, dark horror film. That's kind of where we're coming from."

Regarding DEATH ANGEL's decision to work with Suecof again, Rob said: "I just love the clarity and the power of the final product of the production that we get working together out of his studio. I think his records come out sounding very clear and strong and bright, and you can hear everything. I just love the clarity and the separation of the instruments. He's like retaining an old-school feel, but combining it with a modern production feel. That's what we're shooting for. The working relationship that we have together, we've become really close friends. We've been working together now for four records over practically a decade, so we know each other really well, and we kind of know what we're thinking, we know what we're trying to get out of each other and we know how to work together." 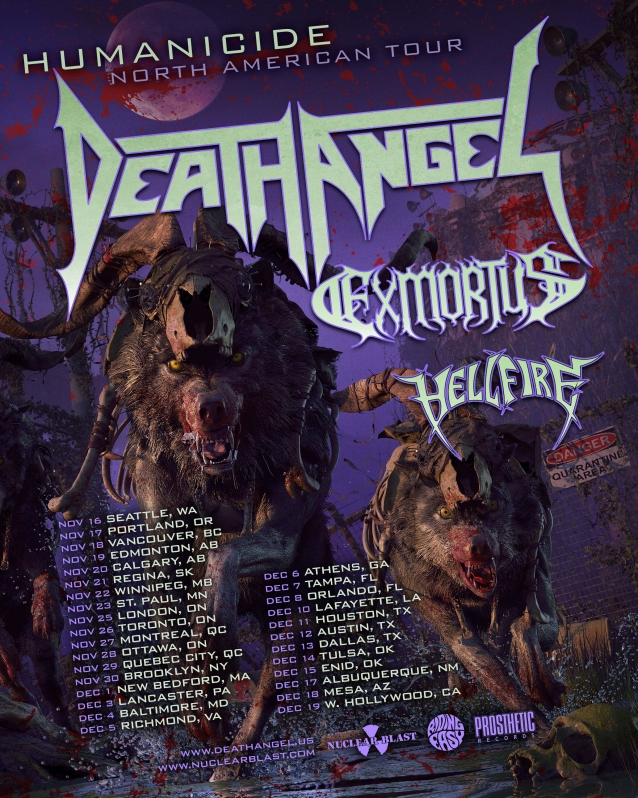