Commenting on the video, guitarist Rob Cavestany says: "The idea started as a visualizer for the song, but when we saw the footage, we were hooked and knew it had to turn into a complete video.

"Ben did an incredible job of depicting the 'Aggressor' concept and his artistic style is unique for DEATH ANGEL. The timing of this release couldn't be better given the circumstances that surround us! See for yourself…"

"Another Death Angel XMas Show" will be streamed live from The Great Northern in San Francisco. Tickets for the shows and a variety of VIP packages are on sale now.

The band says: "The show must go on! The seventh annual DEATH ANGEL Xmas show will be streamed from the Great Northern in San Francisco on two dates in December. In honor of this yearly tradition, we're preparing to deliver a fully packed, high-energy show that is sure to get you thrashing around on your living room floor. While we'll miss seeing the faces of all the wonderful people that come out each and every year from near and far to help close out the year with us, we're happy to be able to invite the rest of the world to be a part of this annual celebration of life and music."

This past October, DEATH ANGEL released a four-song EP, "Under Pressure". The effort included a cover of QUEEN + David Bowie's "Under Pressure", followed by a new track titled "Faded Remains", plus acoustic versions of "Act III"'s classic "A Room With A View" and "Humanicide"'s "Revelation Song". The EP was mixed by Max Norman (OZZY OSBOURNE, MEGADETH, BAD COMPANY) and mastered by Ted Jensen (LAMB OF GOD, MACHINE HEAD, HALESTORM). 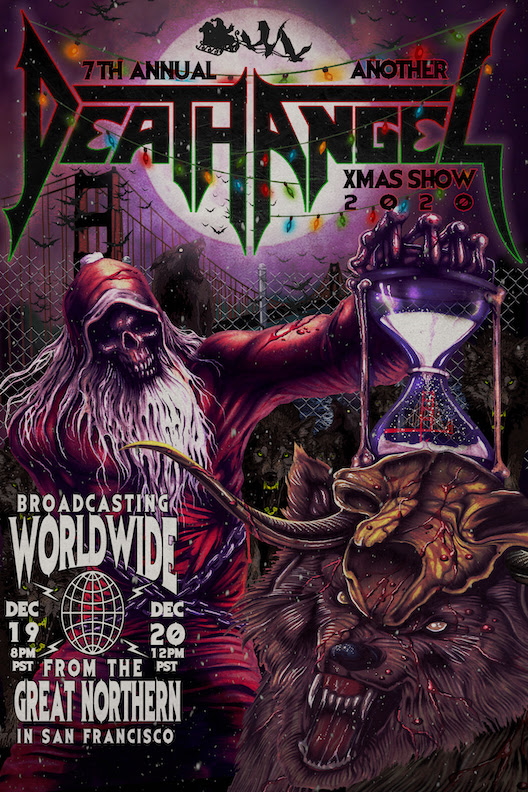