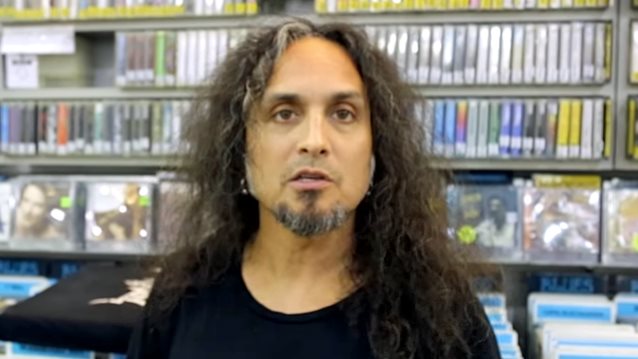 DEATH ANGEL singer Mark Osegueda recently spoke to RadioactiveMike Z about how his band ended up getting METALLICA's Kirk Hammett to produce its first demo, 1985's "Kill As One". He recalled (hear audio below): "[Kirk] took us under his wing when we were very, very young, prior to being signed. We would give him tapes of new songs. We'd see him at Ruthie's Inn or any of those local clubs and we'd give him cassette tapes of new stuff we'd written. It was literally in our rehearsal room. So what we'd do is we'd get our tape recorded or boom box, hit 'Play' and 'Record', stick it in a carboard box and throw a jacket over it and put it in the middle of the room, and that's how we'd record these new songs. And I'd give 'em to Kirk when I'd see him at these shows, just hoping he'd listen. Next time I'd see him at a club, he [would be like], 'Hey, I really dug that new song you wrote.' And eventually he approached us and was, like, 'I'd really be interested in producing a demo for you guys.' How are you gonna say no to that? So it was brilliant. We recorded that up in Glen Ellen, California, which is up in the Wine Country. We went up to the studio there, and over weekends, when we weren't at school, we would go up there and stay at the studio and just record on the weekends. And we did that for about three weeks — three or four weeks even — and it worked out great. And eventually, that's the demo that got us signed to Enigma that released our first two records."

DEATH ANGEL's latest album, "The Evil Divide", was released in May 2016 via Nuclear Blast. The CD was once again recorded at AudioHammer studios in Sanford, Florida with producer Jason Suecof (TRIVIUM, DEICIDE),who previously worked on 2010's "Relentless Retribution" and 2013's "The Dream Calls For Blood".