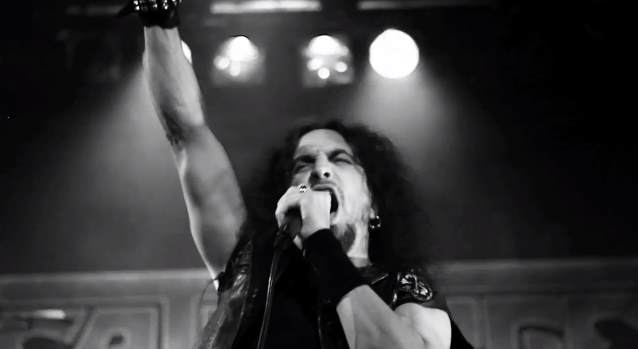 The official video for the title track of "The Dream Calls For Blood", the latest album from San Francisco Bay Area metallers DEATH ANGEL, can be seen below.

Asked how DEATH ANGEL was able to construct such fast, aggressive, brutal material for "The Dream Calls For Blood" while many of the band's contemporaries have, to varying degrees, abandoned thrash and speed metal, DEATH ANGEL singer Mark Osegueda told Metal Blast: "I think with us we kind of went the opposite direction. We got all of the experimentation out while we were young back in the '80s; we tried to push the envelope then and maybe pushed it a little too much. When we reformed in 2001, we were writing new material, sort of fishing a bit, not knowing which direction things would go in. Over time, we started getting on the same page a lot more. Then we lost a couple of the original members, which in turn brought us two younger players who were very hungry to play, very eager to tour, and were also much more thrash-based players. Will [Carroll] is a much more thrash-styled drummer than Andy [Galeon, former drummer], who was a much more groove-based, almost '70s rock kind of drummer. Dennis [Pepa, former bass player] was a much more punk-derived player than Damien [Sisson] is. When Rob [Cavestany] was coming up with the riffs for the new record, he was definitely playing off those strengths. So all of that lead to us going back to our thrash roots and coming up with some of the strongest material we've written to date."