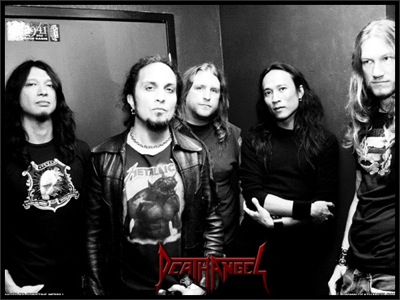 DEATH ANGEL will embark on their first North American headlining tour in support of their new album, "Relentless Retribution", in January 2011. Meet-and-greet VIP packages for the trek, which includes support from LAZARUS A.D., EARLY MAN, BONDED BY BLOOD, and HEXEN, are now available on Ticketmaster.com and Slotix.com.

The ticket packages include the following:

"Relentless Retribution", the new album from DEATH ANGEL, sold 2,700 copies in the United States in its first week of release. The CD landed at position No. 10 on the Top New Artist Albums (Heatseekers) chart, which lists the best-selling albums by new and developing artists, defined as those who have never appeared in the Top 100 of The Billboard 200. The band's previous album, "Killing Season", opened with around 2,300 units back in March 2008. This number was in line with the performance of its predecessor, "The Art of Dying", which registered a first-week sales tally of around 2,100 back in May 2004.