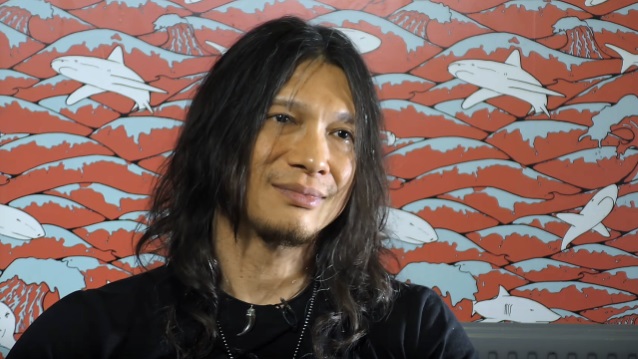 DEATH ANGEL's ROB CAVESTANY On SLAYER's 'Farewell' Tour: 'Some Of Us Could See This Coming'

DEATH ANGEL guitarist Rob Cavestany says that "it wasn't really a total shock" to find out that SLAYER was planning to embark on a "farewell" tour.

Speaking to The Rockpit, Cavestany was asked how he felt about the Tom Araya-fronted outfit calling it quits.

"My thoughts are that some of us could see this coming for various reasons," Rob said. "We've spent a lot of time with SLAYER in the fall of 2016 on the North American tour with SLAYER and ANTHRAX. Those guys are fucking legendary, of course; they're even at the top of their game. I've hardly seen them so tight, putting on such an amazing show and production — everything. However, they're tired, man. They're a little older than us, and you can see that, at some point, you're just going at it to a point that it's going to come to an end, and I can tell that they would want to not fizzle out. They would rather go out while they're still fucking awesome."

Rob went on to say that he didn't expect SLAYER to make to make the farewell-tour announcement "this soon, but I expected it sooner or later, so it wasn't really a total shock, even though it is heartbreaking, because, yeah, they're SLAYER and they're going to go on forever, just like anyone else does. So at this point, my thoughts on that are I hope that we can play on one of the legs of this tour," he said. "It's going to be an amazing tour, and I hope to support those guys one more time before they aren't tourable anymore."

Cavestany also admitted that SLAYER's decision to retire has made him think about the fact his own band will at some point no longer be able to perform its music with the physicality it demands. "As the days go by, eventually you have to realize that there's going to be that day for every one of us [when we are not able to do this anymore], not to mention all these legendary musicians dying," he said. "They're really done, and you're never going to get these people back and they'll never be able to be replaced. It's what's happening to all our gods of music, and you look at your own band and you've just gotta think, 'I've been fortunate that we've been able to do what whatever we did up to this point.' So all that leads me to think about how vital every moment is with your band and one day you're going to be looking back on the old days that you had with this band and running around the world doing all the stuff that we did and it won't be too long from now when that's going to end up happening. So we just take every moment of it for how precious it is. I think it makes everything that much more intense and it's going to make the music we create that much more intense and our shows. We don't take any fucking moment of it for granted. You might not even call it quits; It might call it quits on you, because it happens to people, so you just never know. The way to take that is to just make the most of every moment and put in everything you got in, because, at one point, it will be gone."

DEATH ANGEL's latest studio album, "The Evil Divide", was released in May 2016 via Nuclear Blast. The CD was recorded at AudioHammer studios in Sanford, Florida with producer Jason Suecof, who previously worked on 2010's "Relentless Retribution" and 2013's "The Dream Calls For Blood".