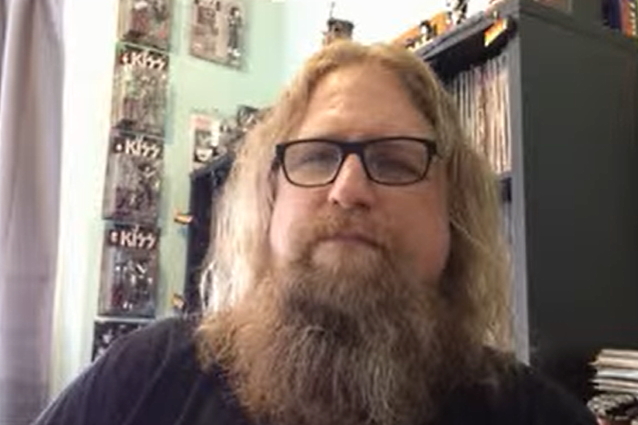 DEATH ANGEL's WILL CARROLL Looks Back On His Near-Fatal COVID-19 Battle: 'It Seems Like It Happened 20 Years Ago'

DEATH ANGEL drummer Will Carroll has once again spoken out about his battle with COVID-19, the disease caused by the new coronavirus. The musician, who spent almost two weeks on a ventilator in an intensive care unit at a Northern California hospital, first got sick when he and the rest of DEATH ANGEL spent more than a month on the road in Europe with TESTAMENT and EXODUS as part of "The Bay Strikes Back 2020" tour.

Carroll discussed his experience of testing positive for the life-threatening illness during an interview with DEATH ANGEL's Ted Aguilar as part of the "Alive & Streaming" YouTube series. Asked how he looks back on the whole experience now that it's been 17 months since he contracted the disease, Carroll said (as transcribed by BLABBERMOUTH.NET): "It honestly seems like it happened 20 years ago; it seems like a lifetime ago for some reason. I can't quite put my finger on why that is. I don't think about it too much anymore. Sometimes when I do, it freaks me out and I kind of scare myself. So I'm just trying to learn from the whole thing and take something positive out of it and just keep myself alive. [Laughs]"

The 48-year-old musician was hospitalized at the California Pacific Medical Center in San Francisco after catching the virus on a European tour in March 2020. While comatose at the facility, Carroll said he saw himself leave his body and plummet down to hell, where Satan — a woman in his case — punished him for the deadly sin of sloth, morphing him into a Jabba The Hutt-like-monster who vomited blood until he had a heart attack. He also said his near-death experience gave him a new outlook on life, with plans to live a healthier life as well as a belief in a higher power.

"It's funny I DJed a couple of nights ago at [a club] in San Francisco, and my playlist was all songs about Satan," Carroll told Aguilar. "And that made me start thinking about the whole vision I had. I was kind of shooken [sic] by it when I first got out of the hospital. I wasn't turning religious but I was taking God and Christianity or Catholicism a little more seriously; I had more respect for it. I'm not a born-again Christian or anything. But while I was playing all these Satan songs the other night, I was, like, 'You know what? There's nothing wrong with still liking Satanic bands like MORBID ANGEL and DEICIDE. There's nothing wrong with listening to this music. I shouldn't feel guilty about it.' I actually felt guilty for a second. [Laughs]"

When Carroll initially discussed his vision in a May 2020 interview, a number of mainstream news outlets picked up his story and focused on the "Satan" angle, with the New York Post running the headline "Death Angel Drummer Says He Met Satan During Near-Death Coronavirus Coma"

Carroll later took to his Facebook page to chastise the media, explaining that his supposed encounter with the devil was only a small part of his experience.

"It seems a lot of news outlets are taking my story and completely missing the point of it," he wrote. "They're focusing on my dream, vision, hallucination, whatever, which is a small part of a bigger story. What they should be focusing on is what it took for me to beat this horrible virus. And the doctors and nurses that worked so hard to make this happen. This whole 'Satan' thing is getting blown wayyy out of proportion."

A few days earlier, Carroll wrote on social media that he was not quite ready to embrace "the God thing."

"To make things clear. I'm not some holy roller all of a sudden," he said. "I won't be attending church every Sunday and I won't be quoting scripture. I still like and have an interest in evil music, movies, art and literature. But this experience was quite frightening to the point where I truly believe a higher power saved me. What that higher power is I haven't quite figured out.

"I strongly believe that everyone's collective prayers and positive energy played a big part in my recovery," he continued. "Before this nightmare I didn't think something like that was possible and I know for sure that Satan had nothing to do with me being alive today. The vision I had was horrifying and it will stay with me forever. But let's not get carried away with the God thing."

Carroll woke up from a medically induced coma on March 30, 2020 after spending nearly two weeks on a ventilator. Doctors told the San Francisco Chronicle he was in critical condition and came close to dying.