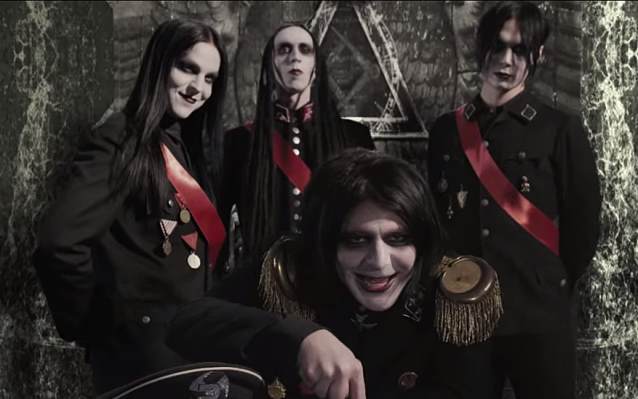 "All The Devil's Toys", the new video from the Swedish industrial rock band DEATHSTARS, can be seen below. The clip was produced by Staca Stanimir Lukic of Serbia's iCODE Team (SOILWORK, SIRENIA). The song is taken from the group's fourth studio album, "The Perfect Cult", which will be released on June 13 via Nuclear Blast. The follow-up to 2009's "Night Electric Night" was captured in several studios: drums, guitars and bass were recorded at Bohus Sound Recording in Kungälv, Sweden; vocals at Gig Studios in Stockholm, Sweden; and keyboards, orchestration and editing was done at Black Syndicate in Stockholm. The mix, as usual, was handled by Stefan Glaumann (RAMMSTEIN, WITHIN TEMPTATION),while DEATHSTARS guitarist/keyboardist Emil "Nightmare Industries" Nödtveidt took care of the production. For the drum, guitar and bass production, Nightmare worked with Roberto Laghi (ENTOMBED, IN FLAMES) at Bohus Sound Recording. The mastering was handled by Svante Forsbäck (VOLBEAT, RAMMSTEIN) at Chartmakers in Helsinki, Finland.