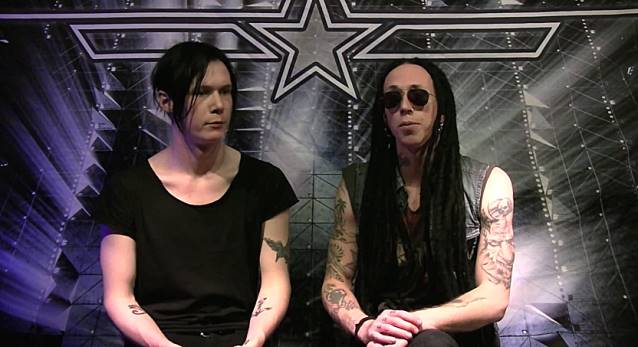 DEATHSTARS' fourth studio album, "The Perfect Cult", was released on June 13 via Nuclear Blast. The follow-up to 2009's "Night Electric Night" was captured in several studios: drums, guitars and bass were recorded at Bohus Sound Recording in Kungälv, Sweden; vocals at Gig Studios in Stockholm, Sweden; and keyboards, orchestration and editing was done at Black Syndicate in Stockholm. The mix, as usual, was handled by Stefan Glaumann (RAMMSTEIN, WITHIN TEMPTATION),while DEATHSTARS guitarist/keyboardist Emil "Nightmare Industries" Nödtveidt took care of the production. For the drum, guitar and bass production, Nightmare worked with Roberto Laghi (ENTOMBED, IN FLAMES) at Bohus Sound Recording. The mastering was handled by Svante Forsbäck (VOLBEAT, RAMMSTEIN) at Chartmakers in Helsinki, Finland.

As far as the lyrics are concerned, vocalist Andreas "Whiplasher Bernadotte" Bergh stated that "all the tracks are about our lives. Each song is a reflection on a situation or a topic that deals with our experiences, usually from a jet black perspective."

With visions inspired by amoral excessive lives, human fears and decay, the songs are nothing less than a dark playground set between straight forward tracks, atmospheric anthems and the unwashed loins of lawless rock.