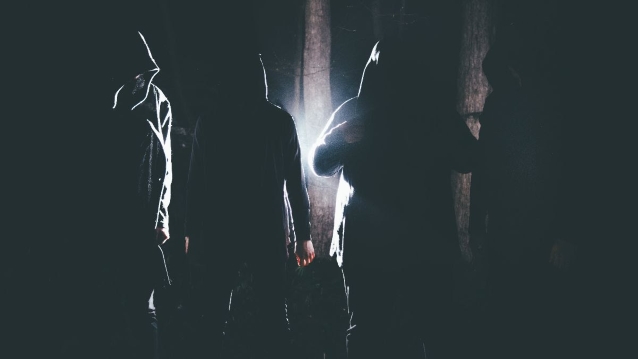 Enigmatic dark metal outfit DEATHWHITE has completed the recording process for its forthcoming second full-length album, "Grave Image". The LP was tracked in April and May at Cerebral Audio Productions under the watchful eye of Shane Mayer, with vocal tracking taking place at Mana Recording with engineer Art Paiz. It was mixed by Mayer, with Dan Swanö taking care of the mastering process.

The band comments: "The recording process for 'Grave Image' was seamless and enjoyable throughout, something we owe largely to the skills and expertise of those so kind to assist us in making this album a reality. In particular, we are indebted to Mr. Shane Mayer, whose production skills and congenial nature is second to none. The sonic jump between our 2018 album 'For A Black Tomorrow' and 'Grave Image' is quite evident, and we are eager to share its contents in the near future. We are not too fond of clichés or typical band-speak, but the songs on 'Grave Image' are heavier than anything we've created before, but also include a wealth of new elements, some surprising… some not.

"Now that the album is in the proverbial can, we have turned our attention to its cover art and related materials. Further details — as well as release date — will be shared in due time."

Formed in 2012, DEATHWHITE was created in part to follow on the path first explored by dark metal torchbearers such as ANATHEMA, KATATONIA, MY DYING BRIDE and PARADISE LOST.