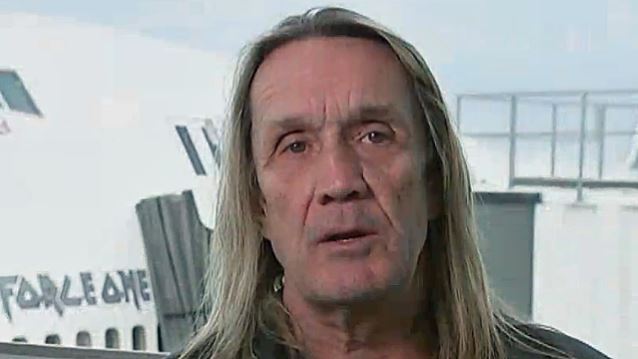 Despite IRON MAIDEN's reputation for focusing on the darker side, drummer Nicko McBrain told Australia's ABC that he is a committed Christian who doesn't feel he is doing anything wrong.

"The 'Guv'nor' does not have a problem with it," Nicko explained. "Obviously, I'm still doing it.

"I kind of struggled with the idea earlier on when I first found my faith, and I put it in prayer, and I haven't had a problem with it," he continued.

"You know, the old adage is, 'The greatest trick the devil ever played on us is making us think he doesn't exist,' and we all know he does."

A few years ago, McBrain spoke to Canada.com about how his faith allows him to play songs like "The Number Of The Beast", with lyrics like "666, the one for you and me." McBrain reasoned: "It's a story. If you look in the Book of Revelation, it tells you about all that, all that grief, all that business. And that, by the way, was a song written from a nightmare that [IRON MAIDEN bassist] Steve [Harris] had.

"I can tap people on the shoulder and say, 'I'm not glorifying him [the devil]'; if I was, then I wouldn't be Christian. Because I understand, and most Christian people understand, that sin is the Devil's domain, and the ultimate sin is death, but we have a way up, and that's where your faith and your Christianity comes into play. Sometimes I've had an opportunity to talk to people about my faith, and what I feel, and maybe that's the way the good Lord's working with me."

He continued: "To still be able to be in such a great band, where people think we're demonic or Satanic, most people that know and have a modicum of sense and intelligence know that not to be true. It doesn't take an Einstein to listen to the records and listen to the lyrics of the songs to know what's going on.

"Okay, so Eddie's the mascot of the band, right? And he's a… sort of… well, he's a demon, you know! He's whatever you want him to be, you know? I mean, listen here, look at the number of the Beast, here he is, the Devil's the puppet! But you know, we're not glorifying Eddie as being evil. It's just … he's just a cartoon character.

"But people can look at that and say, 'Wait a minute, Nick. How can you say you're a Christian [when] you're playing in a band that's got this kind of stuff going on?'"

Nicko went on to say: "But when you become a Christian, you don't become sinless, the idea is to sin less. We're all sinners, we're never going to be clean 'till the day the good Lord is standing in front and judgment comes, but to me, I try to live my life, I do fall off, and occasionally I fall off hard and I have to get down on my knees and beg forgiveness, so it's not an easy ride, and it's not professed to be either."