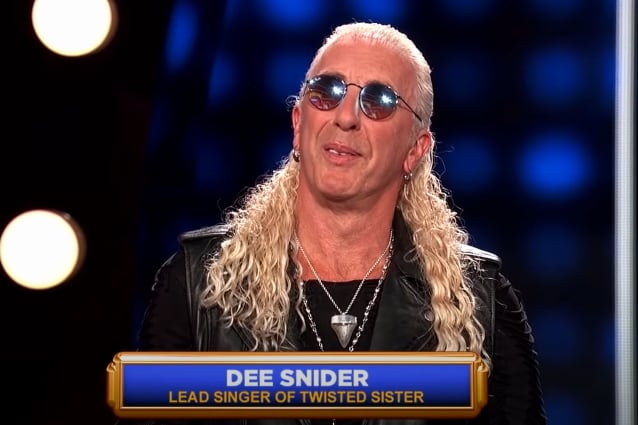 TWISTED SISTER singer Dee Snider and his family won $25,000 for National Coalition for Homeless Veterans during an appearance on the hit ABC game show series "Celebrity Family Feud". The Sniders faced off against "The Bradshaw Bunch" — NFL Hall Of Fame quarterback Terry Bradshaw and his wife and their three daughters.

In a tweet following Sunday night's (June 20) episode — which was actually taped in March — Snider wrote: "The fact that veterans are living on the streets is tragic. They should be supported and honored, not homeless!"

Airing on the ABC television network, "Celebrity Family Feud" is hosted by stand-up comedian, actor, author and Emmy Award winner Steve Harvey. It features celebrities, along with their immediate family members or their extended TV families, going head-to-head in a contest to name the most popular responses to survey-type questions posed to 100 people for a chance to win money for a charity of their choice.

According to Buzzer Blog, season seven of "Celebrity Family Feud" was filmed earlier this year under COVID-19 restrictions.

Bradshaw was the quarterback of the Pittsburgh Steelers from 1970 to 1983. During that time, he won four Super Bowls, and was named Super Bowl MVP twice. Since 1994, Bradshaw has been a television sports analyst and co-host of "Fox NFL Sunday".

Snider previously starred in several reality TV shows, including "The Celebrity Apprentice", "Gone Country" with John Rich, MTV's "Rock The Cradle" with his son Jesse, and "Growing Up Twisted", an A&E series featuring the entire Snider family and their Long Island lifestyle. He is also a frequent host on MTV Networks, and his own long-running nationally syndicated radio show, "House Of Hair", is heard on more than 200 stations in North America.