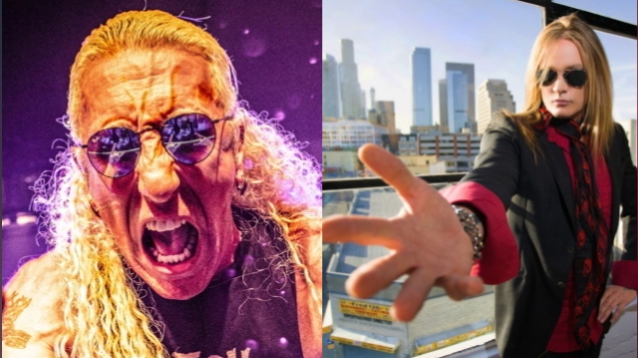 Dee Snider and Sebastian Bach have called on politicians to address gun violence in America after a string of mass shootings in the past week, including one that killed 10 people in Colorado.

On Tuesday (March 23), Snider took to his Twitter to respond to a four-week-old tweet from staunch Second Amendment supporter Lauren Boebert, who represents Colorado's 3rd Congressional District, in which she wrote: "The people who think we need more gun control are the same people who think the 'AR' in 'AR-15' stands for assault rifle." The TWISTED SISTER singer fired back: "I thought it stood for 'You AR a fucking idiot!' - sincerely, Dee Snider. Proud gun owner, 2nd amendment advocate AND BELIEVER IN INTELLIGENT GUN CONTROL!!! If you need an AR-15 for self defense...you are a terrible shot."

Bach apparently agreed with Snider, sharing Dee's tweet and writing: "The people that believe that it's the year 1776 & the 2nd Amendment applies literally in 2021 do not understand the difference between a Musket and an AR-15." The ex-SKID ROW frontman also replied to a 2019 tweet from former White House press secretary Sarah Huckabee Sanders in which she wrote: "Democrats say we have guns in America because of 'corruption'. No, we have guns because it's our God-given right enshrined in the Constitution." Sebastian tweeted: "God does not give a shit about guns and he does not give a shit about what you say. Stop using God to justify murder and your ignorance".

Bach had previously voiced his views on guns several times, including in August 2019 after back-to-back mass shootings in the United States left at least 29 dead and 53 injured in Texas and Ohio. At the time, Bach repeatedly lambasted then-President Donald Trump, Senate Majority Leader Mitch McConnell, Vice President Mike Pence and other Republican leaders for their inaction on gun regulation. "You and your useless Republican party don't give a fuck about the safety of the citizens of the USA," the former SKID ROW singer wrote in response to a tweet of consolation from Ohio senator Rob Portman. "Your 'prayers' are a slap in the face to the 30 people who were mowed down yesterday because of your uselessness."

Several other high-profile musicians have called on lawmakers to take action when it comes to gun laws in the United States, including Corey Taylor (SLIPKNOT), Paul Stanley (KISS), Nikki Sixx (MÖTLEY CRÜE) and Alex Skolnick (TESTAMENT).

I thought it stood for "You AR a fucking idiot!" - sincerely, Dee Snider. Proud gun owner, 2nd amendment advocate AND BELIEVER IN INTELLIGENT GUN CONTROL!!! If you need an AR-15 for self defense...you are a terrible shot. https://t.co/ZWhlJ5SQbr

The people that believe that it's the year 1776 & the 2nd Amendment applies literally in 2021 do not understand the difference between a Musket and an AR-15. https://t.co/qaJ5batObw

Why are we the only country on the planet that allows this to happen https://t.co/01AIxP5SG2