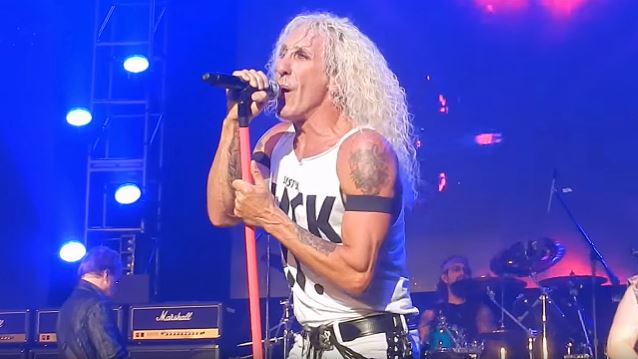 In a brand new interview with Ultimate Classic Rock, TWISTED SISTER singer Dee Snider was asked if he feels the band has finally gotten its due and the respect it deserves, more than forty years after its inception. He responded: "I've often taken personal responsibility for wherever I went in my head, making the wrong decisions. All of the right decisions that I made to get us there, I started to make wrong decisions to crash and burn too early. And the band is dismissed as being a flash in the pan, one-hit wonders — actually, two hits. That's troublesome.'

He continued: "The thing that bothers me more than anything is that TWISTED SISTER is one of the best live bands. We really didn't tour in the scheme of things on an international scale for that long of a time. There was a couple of years where we were out there in the thick of things. A few years, but we aren't known as that and it's a shock to people when we do these festivals and we annihilate everybody. And we do and people are going, 'Holy shit! I didn't know!' So, it's still one of the best-kept secrets."

Snider added: "You know, out of all of the things that I do personally — and I do a lot of things, you know, I act and I do radio and I write screenplays , all of that stuff — the thing that I do best, I front a band and I front it like few front a band. But I'm not [part of that conversation]. I see a list of the greatest frontmen of all time and I'm like 46 and I'm going, '46?' I'm looking at the people in front of me going, 'Seriously, Tom Araya?' I mean, nothing against SLAYER, but, I mean, he's a bass player; he's not even a frontman! But that just speaks to the fact that, hey — and I think if Tom saw that list, he would go, 'Holy shit, I really shouldn't be in front of Dee.'

"I remember that we played some huge festival and I'm going to the stage — oh, it was Heavy Montreal and it was METALLICA, ANTHRAX, SLAYER and TWISTED SISTER's on the bill. Seventy-five thousand people are going, 'What the fuck is TWISTED SISTER doing here?' We're walking to the stage and I see Kerry King and the band up there and I go, 'What are you doing up here, Kerry?' He goes, 'I told the guys, you've got to go up and watch Dee.' And we took that fucking place apart. You go look online at Heavy Montreal, it was like, holy shit! TWISTED SISTER, a bunch of old men, came up there and just melted every fucking bit and destroyed every band, and nobody saw it coming. So, that's frustrating to me and so no, I don't feel like really the band has gotten its due."

"We Are Twisted F***ing Sister!" is a 134-minute documentary film by Andrew Horn. The film follows the band from their beginnings as a cross-dressing glam band playing four shows a night, six nights a week in New Jersey bowling alleys and Long Island beach bars, to the suburban mega-clubs of the late '70s and early '80s, to their bust-out appearance on the U.K. rock TV show "The Tube".