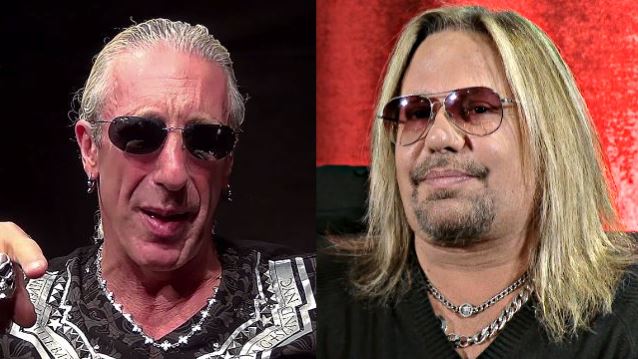 In a brand new interview with Yahoo! Music, TWISTED SISTER singer Dee Snider addressed the fact that some fans in the 1980s were discouraged by the fact that he was a rock star that liked to rock but didn't party, so they turned their attention to bands like MÖTLEY CRÜE.

"[MÖTLEY CRÜE] singer Vince Neil could go and literally kill someone in a car accident," Snider said. "There were two other women who were in a van who were permanently crippled from that famous car accident that killed Razzle from HANOI ROCKS. And people are cool with that. They're like, 'Yeah, all right! Rock 'n' roll!!' And the guy didn't do any serious jail time. I'm, like, 'Really? Really? He's a murderer.' I don't get that at all."

In a 2006 interview with Metal Express, HANOI ROCKS guitarist Andy McCoy stated about the accident: "I was there. What happened was Razzle disappeared, so did Vince. So me and T-Bone, Tommy Lee, took his car and went looking for them. We drove past this accident, and I was, like, 'What color was the car they were driving?' Because we just passed a fucking accident with a bright red sports car. Then I saw Razzle's hat on the street."

In 2011, HANOI ROCKS singer Michael Monroe gave Sleaze Roxx his take on what happened that night: "There was an accident, and unfortunately our drummer was killed. As far as Vince Neil, I have nothing to say. It was an accident. What happened happened, and it can't be changed. Everybody suffered from the whole thing."