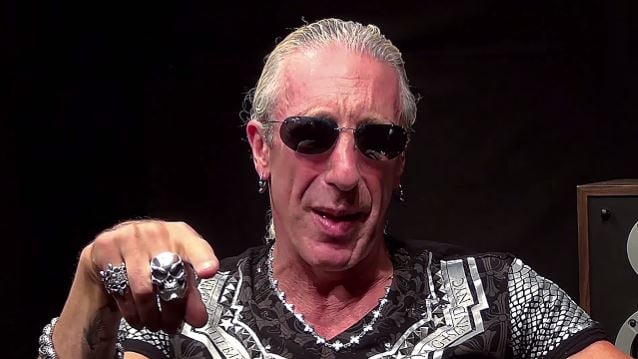 TWISTED SISTER singer Dee Snider says that he has no issues with Republican presidential hopeful Donald Trump using the band's signature anthem "We're Not Gonna Take It" as the "exit song" at the controversial politician's recent campaign stops.

Speaking to TMZ, Snider — who knows Trump personally after appearing more than once on "The Celebrity Apprentice" — claimed that the band is not receiving any royalties from Trump using the track. He said (see video below): "Donald Trump is a good friend and a great guy, and I support him turning the political system on its head. The song 'We're Not Gonna Take It' is a song about rebellion, and there's nothing more rebellious than what Donald Trump is doing right now. Although [Democratic presidential candidate] Bernie Sanders can use it as well; he's turning things upside down too."

Back in June, Neil Young made headlines when he asked Trump to stop using his music along the campaign trail. Dee has no such issues with Trump using TWISTED SISTER songs, saying: "I don't necessarily agree with every single thing Donald Trump says, but I do support his spirit, his attitude, and people are just… They've had all they can stand and they're not gonna take it anymore, so 'We're Not Gonna Take It' is the perfect song."

Snider, who didn't rule out the possibility of performing "We're Not Gonna Take It" at an upcoming Trump rally, said that Donald called him in advance and asked if he could use the song. "I said, 'Look, you're a buddy of mine and I like what you're doing, so go for it,'" the singer explained.

Snider recently told The Huffington Post Canada about Trump: "He's a really nice guy, especially off-camera, when he's not being The Donald. He's very self-deprecating and when the cameras would be off he'd make jokes about his hair, make jokes about his skin: 'Do I look too orange?' He was very welcoming and kind, but the minute they go, 'Mr. Trump, three.. two.. one...' He puckers the lips and furrows the brow. 'Dee, why shouldn't I fire you?'"

Snider, however, stopped short of saying people should vote for Trump.

"Should he be president? Oh, I don't know about that," Snider said. "He's a little too much of a narcissist. But he's stirring the pot, that's one thing he's definitely doing, he's shaking it up. I think that's why he's getting ratings he's getting, people are just sick of the status quo."

He continued: "Now we have reality politics. The only mistake they made in that Republican [leaders'] debate, someone should have been voted off."