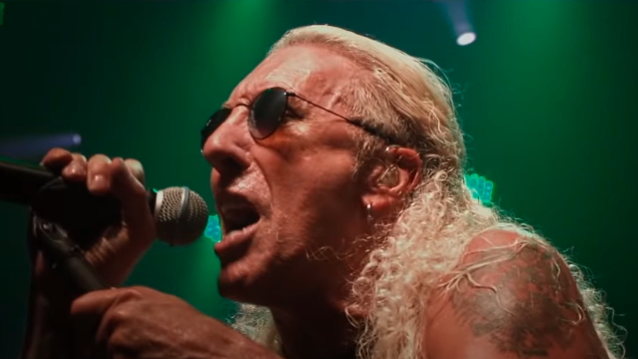 During an appearance on the "Behind The Vinyl" podcast, TWISTED SISTER frontman Dee Snider revealed that he is recording a Christmas song with ex-NIGHTWISH frontwoman Tarja Turunen.

"I wrote this song for my wife many years ago," he said (hear audio below). "You guys may or may not know that Celine Dion recorded a Christmas song I wrote [called 'God Bless Us Everyone']. I wrote it as a gift for my wife; I never wrote it for commercial purposes. And I can't — it's just out of my range to sing it. But long story short, I decided to do my own rendition of it, and I asked Tarja to sing it as a duet with me, 'cause it's got some really high parts in it. So Jeff Pilson from DOKKEN and FOREIGNER, he's producing it. And we're just finishing the tracks right now, so we're gonna start doing the vocals. That'll come out later this year."

Dion reportedly heard "God Bless Us Everyone" from a sound engineer and wanted to record it for her first Christmas album, 1998's "These Are Special Times". Snider gave his blessing, but he asked that nobody reveal his identity, because he feared Dion would change her mind if she discovered the man behind the tune was a controversial rocker. The song, retitled "The Magic Of Christmas Day (God Bless Us Everyone)", went on to sell 10 million copies worldwide.

In a 2002 interview with the Washington Post, Dee revealed that he wrote the tune at the request of his wife, Suzette Snider, who asked her husband to write her a Christmas song as a present.

"And I told her she was insane," Dee said.

But he did, a lovely song he titled "God Bless Us Everyone". Unfortunately, Snider couldn't sing it — it wasn't in his range — so he had some studio musicians record it for Suzette. Producer Ric Wake, who's worked with such pop divas as Mariah Carey and Jennifer Lopez, kept a copy and called Snider to tell him Dion wanted to record it.

Dion included it on "These Are Special Times", though she changed the title. Which, Snider says, "was fine. Just send me my 7.5 cents per record." The album credit reads D. Snider.

"I'm sitting at home watching it, my wife's crying, and I'm thinking 'This is just too much,' " Snider said. "At the end, the camera pulls away and they're broadcasting into Times Square with Rosie and Celine and the children's choir holding candles, singing 'God Bless Us Everyone… '

"I just wanted to pop out from behind the curtain: It's me! It's me! Merry Christmas!"

Back in 2018, Snider and Turunen were among the guest musicians who performed with Finland's annual, all-star symphonic Christmas rock project RASKASTA JOULUA, which translates to "Heavy Christmas."