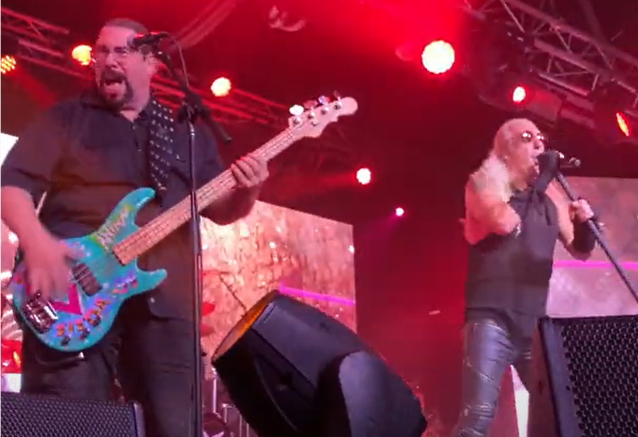 Dee Snider was joined by his TWISTED SISTER bandmate Mark "The Animal" Mendoza on stage during Dee's concert last night (Friday, June 11) at Stereo Garden in Patchogue, New York for a performance of the band's classic song "Under The Blade". Video footage of Mark's appearance can be seen below.

According to Dee, the capacity for the concert, which was filmed for future release, was limited to 200 vaccinated or tested people due to COVID-19 restrictions.

A portion of the proceeds from the show are being donated to Melissa's Wish, a not-for-profit organization founded with the purpose of providing short term, non-medical financial aid, in the form of a grant, to the caregivers assisting those afflicted with a serious illness, injury or end of life event.

Dee will release his fifth full-length solo album, "Leave A Scar", on July 30 via Napalm Records. Once again produced by Jasta with co-production, mixing and mastering by drummer Nick Bellmore, the LP sees Snider & Co. continuing in the invigorated direction of 2018's "For The Love Of Metal".

Don't wait to get your tickets. As of now they are limited to 200 vaccinated or tested people. With any luck they will release more tickets as the date gets closer. https://t.co/yqHBRSghOt