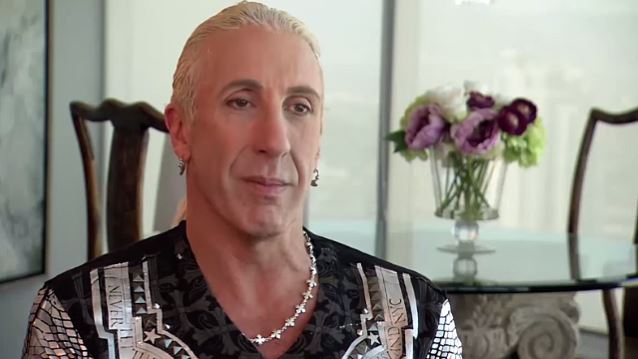 TWISTED SISTER singer Dee Snider says that the band's drummer, A.J. Pero, exhibited "irresponsible behavior" by not having himself "checked out" for cardiovascular disease before his tragic death last month.

Pero died at the age of 55 while on tour with the band ADRENALINE MOB. After members of that group failed to rouse him on their tour bus on March 20, he was taken to a Poughkeepsie, New York hospital and pronounced dead of an apparent heart attack.

"People ask me how I feel about A.J.'s passing, and, quite honestly, I'm going through a real period of anger right now about it," Snider told TMZ.com (see video below). "He was a great guy, and I loved him dearly. But he had a history of heart disease — his family did; his father died in his early 60s of heart disease — and A.J. never had himself checked out. And when they did the autopsy, he had 95 percent blockage, advanced heart disease. And he didn't have to die. And I feel it's, basically, irresponsible behavior on his part. He had two ex-wives and an ex-girlfriend of 19 years, four kids he left behind. And you have a responsibility, as a parent, as an adult, to get yourself checked out.'

He continued: "So, people, please, get yourself checked out. There's no reason for people to die of heart disease in this day and age."

In a statement to "The House Of Hair", Snider reiterated the same sentiment. He said: "This is the unfortunate reality of irresponsible adult behavior. Not only did A.J. Pero have a family history of heart disease, which he allowed to go unchecked, but he did not have a will, left behind two ex-wives, a longtime girlfriend, four children between the three of them, and a mess of an estate to be sorted out. Now, there is infighting, mistrust and dissension amongst the family members about how to handle life after A.J. What a mess. While the legalities of the situation are being sorted out, TWISTED SISTER is doing a show to raise some money to help the family out in the short term. This unfortunate situation should be a life lesson to all to take responsibility for the world we create and will leave behind when we are gone."

As previously reported, Pero's longtime girlfriend, Michele Agnello, launched a GoFundMe campaign to help defray the financial stress that she and Pero's daughter now face, but the campaign has since been discontinued without an explanation.

TWISTED SISTER will embark on its final tour, dubbed "Forty and F**k It", in 2016, the band's publicist has confirmed.

To honor the memory of A.J. Pero, two shows will take place this spring on the East Coast and West Coast. The first, on May 30 at the Hard Rock Hotel and Casino in Las Vegas, will be filmed for broadcast, DVD, and CD. The second, for the A.J. Pero family, is scheduled on Saturday, June 13 at The Starland Ballroom in Sayreville, New Jersey.

Additionally, fulfilling all concert obligations that have been made for the remainder of 2015 (in several different countries),TWISTED SISTER wants its fans to know all festival dates that they have been advertised as playing will happen.