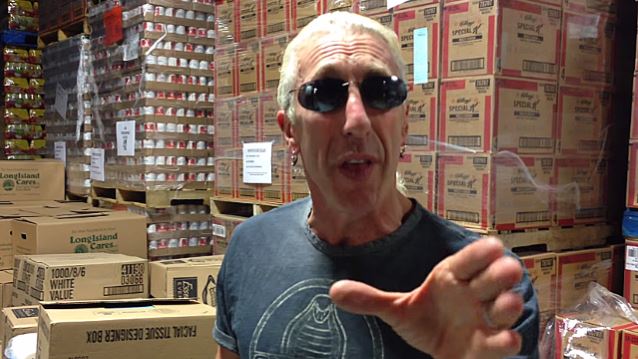 DEE SNIDER Slams 'Raiding The Rock Vault': It Is 'A Tribute Band Of A Bunch Of Add-On People'

"Raiding The Rock Vault" has been described as a "90-minute history of classic rock performed by members of some of the greatest bands in history." Its concept is very similar to that of "Monster Circus", the 2009 production fronted by Snider, who was backed by a lineup of sidemen and singers, including bassist Rudy Sarzo of OZZY OSBOURNE, QUIET RIOT, WHITESNAKE and DIO; singer and guitarist John Corabi of MÖTLEY CRÜE and RATT; drummer Fred Coury of CINDERELLA; guitarist Bruce Kulick of KISS; and guitarist Tony Montana of GREAT WHITE.

When John Katsilometes of the Las Vegas Sun started an interview with Snider last week by saying, "The first time I ever talked to you was before the opening of 'Monster Circus'," Snider swiftly responded: "Oh, you mean 'Raiding The Rock Vault' with the actual guys who were on the original recordings? That was 'Monster Circus'."

He continued: "'Rock Vault' is a tribute band of a bunch of add-on people who were not the people who played on these classic albums except for [guitarist] Howard Leese, who is the only actual guy who was in the studio making the records we love. Otherwise, it's an army of guys up there claiming their credentials, that they were in these bands, and they are not legit."

Asked if he has seen "Raiding The Rock Vault", Snider said: "I refuse to go to it. It's offensive to the guys who actually played on these albums. But I've spent enough time bashing it. I've been bashing it for a while, actually."

The "Raiding The Rock Vault" production consists of the following musicians:

"Monster Circus" — which featured Snider's take on TWISTED SISTER's "We're Not Gonna Take It" and QUIET RIOT's "Metal Health", along with OZZY OSBOURNE's "Crazy Train" and AC/DC's "Highway To Hell" — closed after a set of a half-dozen weekend runs in the spring of 2009.

"Raiding The Rock Vault" opened at LVH in March 2013 and moved to Tropicana in December 2014. Musician, producer and vocalist John Payne (ASIA),who co-wrote the show's original script but was let go from the production in May 2014, sued his former "Raiding The Rock Vault" collaborator Sir Harry Cowell last July, alleging copyright infringement and slander and claiming he was owed money for his royalties and performances. That lawsuit was settled in December.