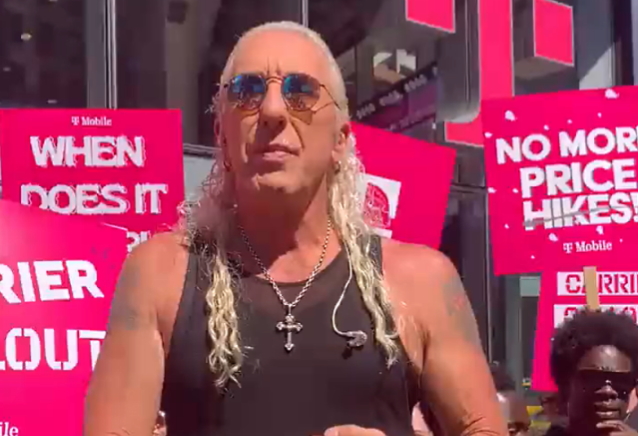 TWISTED SISTER's Dee Snider has teamed up with T-Mobile to promote the company's "Carrier Callout" campaign in an attempt to win over AT&T and Verizon customers after the two carriers announced that they were raising prices on select plans.

Snider explained his involvement with T-Mobile in a tweet on Monday. He wrote: "Last year I was railing against AT&T for how they were treating me after being a customer for 2 decades! The gave me zero response & before switching services I swore I wasn't finished with them. Tomorrow I make good on my promise! BWAHAHAHA!!"

Not only can families switch to T-Mobile and save up to 20% each month with three or more lines on qualifying plans, they have peace of mind their price won't go up with T-Mobile's Price Lock. When those facing price hikes switch to Magenta MAX at T-Mobile, they'll receive $200 per line via virtual prepaid card and up to $1,000 with five lines.

"Inflation shouldn't be an excuse to jack up prices just because you can get away with it. But that's the [above-mentioned] carriers' way," Mike Sievert, CEO of T-Mobile, said in a press release. "T-Mobile is here to help our customers battle inflation by not adding to the stress of price hikes. It's got to be a mind-numbing experience for AT&T and Verizon customers who have watched their rates go up continuously over the last few years."

"We're Not Gonna Take It" was written solely by Snider. As influences for the song, he previously cited the glam rock band SLADE, the punk band SEX PISTOLS, and the Christmas carol "O Come, All Ye Faithful".

I told AT&T they couldn’t ignore me!! HAHAHAHA!!! https://t.co/f3AXrcSMyB

Had fun being a 🤘#TMobilePartner and letting those other wireless 🖕 carriers know aren't going to take their rate increases! #CarrierCalloutpic.twitter.com/C7AnFbZzsT

This song by @deesnider got me grounded once😂🤣 Feels somehow more powerful today🤘#CarrierCalloutpic.twitter.com/CBboWzRXKY

Ready to turn it up in Times Square! These peeps don't know what's ab to hit them. ⁦@TMobile⁩ ⁦@MikeSievert⁩ #CarrierCallout#TMOPartnerpic.twitter.com/DC5OOW7vBV

I don't expect you to remember, but last year I was railing against AT&T for how they were treating me after being a customer for 2 decades! The gave me zero response & before switching services I swore I wasn't finished with them. Tomorrow I make good on my promise! BWAHAHAHA!! https://t.co/qcrUAuQHWb