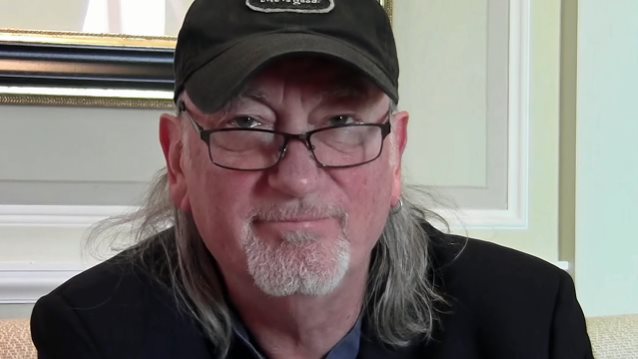 Barbara Caserta of Italy's Linea Rock recently conducted an interview with DEEP PURPLE bassist Roger Glover. You can now watch the chat below.

Asked if there is anything that he has envied about the other two bands that are considered to be part of the "holy trinity" of British heavy rock — BLACK SABBATH and LED ZEPPELIN — Glover said: "Not really. I didn't actually know much about BLACK SABBATH. I thought 'Paranoid' was a great single; I loved that. But the depths of the albums I never really got into. ZEPPELIN I heard before I joined PURPLE — just within a couple of weeks. And I loved it — that first ZEPPELIN album blew me away and changed my thinking about music, actually."

He continued: "The word 'heavy' was being used a lot in the mid-to-late '60s — heavy music. I mean, [Jimi] Hendrix and CREAM were, sort of, paving the way, if you like. I thought 'heavy'… The band I was in before PURPLE, we thought 'heavy' was just having more equipment and playing louder. It's not that. [Laughs] It's [not] the same old stuff but louder. But I'd suddeny realized, when I listened to ZEPPELIN, especially 'Dazed And Confused' and 'How Many More Times', 'heavy' didn't mean loud and big; it was an attitude. That was the key. And right on the heels of that came meeting DEEP PURPLE. So it was a meeting of disparate things that all of a sudden I actually got the knowledge of where I'm going a little bit as opposed to just shooting in the dark."

DEEP PURPLE's new studio album, "InFinite", will be released on April 7 via earMUSIC. The disc was tracked in February 2016 at a studio in Nashville, Tennessee and was once again helmed by Bob Ezrin, who has previously worked with KISS, PINK FLOYD, PETER GABRIEL, ALICE COOPER and KANSAS, among others.

"InFinite" will be the first album for Glover and singer Ian Gillan in their 70s. Gillan, the oldest member of the band, turned 71 last August. Glover became 71 in November. Paice is still several years younger at 68.

The band is rounded out by keyboardist Don Airey and guitarist Steve Morse. Airey joined in 2002, replacing Jon Lord. Morse joined in 1994 as the replacement for Ritchie Blackmore.