According to a posting on the Deep Purple Appreciation Society web site, DEEP PURPLE drummer Ian Paice will take part in a short European tour with PURPLE tribute act PURPENDICULAR in December 2008. The first of the confirmed dates is in Innsbrück, Austria on December 18, to be preceded by a drum clinic. The band part of the show will apparently feature "a large amount of obscure PURPLE tracks."

Confirmed dates so far are as follows: 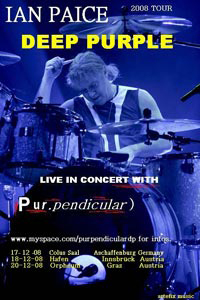