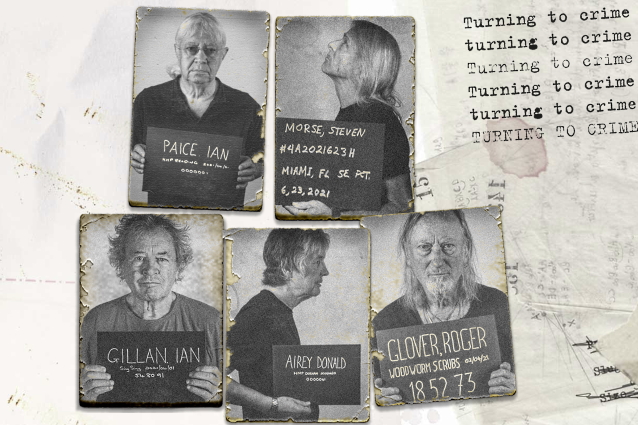 Legendary rockers DEEP PURPLE have launched a countdown clock online for what is expected to be an announcement of the first details of the group's new music. The countdown, which is scheduled to hit zero on October 6 at 7:00 a.m. PDT / 10:00 a.m. EDT, can be found on the domain name TurningToCrime.com — a possible song or album title — where visitors are redirected to a page on the web site of DEEP PURPLE's record label, earMUSIC. The landing page features mugshot-like photos of bandmembers Ian Gillan, Roger Glover, Ian Paice, Steve Morse and Don Airey, along with the text "Turning To Crime" and the aforementioned countdown clock.

Last December, DEEP PURPLE bassist Roger Glover revealed during a virtual meet-and-greet with Finnish fan Anssi Herkkola that the band was planning to enter the studio in 2021 to begin work on another album. Speaking about how he and the other members of PURPLE have been spending their coronavirus downtime, Roger said: "All this COVID situation has meant that we can't tour. We're twiddling our thumbs, really, for over a year, and the idea was to possibly go back in and do another album. And so we're just working towards that. It's so quick after we'd done the last album, [and] maybe that will spoil things, but we're gonna try and do another album at some point next year. We're experimenting with stuff."