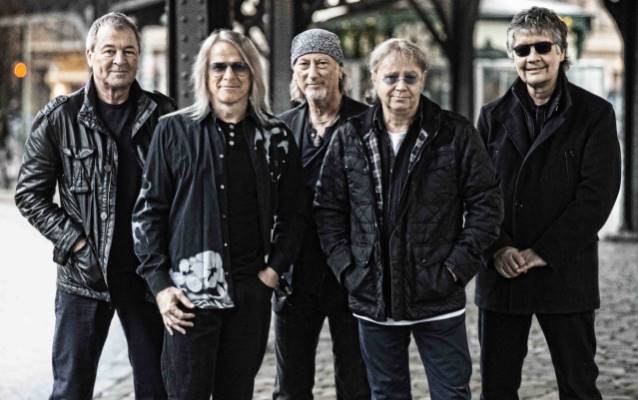 Legendary rockers DEEP PURPLE are writing material for their 20th studio album, tentatively due in 2014.

The band's lead singer, Ian Gillan, tells Zeitung: "The whole band is [in Portugal]. We have a studio in the Algarve where we're working on new songs.

"In the evening we take a sip of good red wine and enjoy the tranquility. I'm woken up at dawn by a rooster in the neighborhood and I get up when it gets light. When it gets dark in the evening, I go to bed. It's a no frills life; but it's a good life down here."

The deluxe release of DEEP PURPLE's seminal live album "Made In Japan" was made available in multiple formats on May 19. Gillan admitted: "I don't like live albums especially. But I know the importance and significance of 'Made In Japan'. The tour, 42 years ago, blew me away. It was my first time in a country where I felt fundamental differences in mentality to Europe. It was a culture shock to me. But it's influenced me in a positive sense."

According to Gillan, he has no plans to retire from touring any time soon. "I can't imagine not being on stage," he said.

"When I was a teenager, I went to a Cliff Bennett concert and I released I wanted to be where he was. The interaction with the audience, and even more important for me, with the musicians — that's pure magic.

"With a DEEP PURPLE concert, you never know exactly what will happen. I don't want to miss those feelings."

"Now What?!", the 19th studio album from DEEP PURPLE, was released in April 2013 via earMUSIC, the Hamburg, Germany-based international rock label which is part of Edel Group.