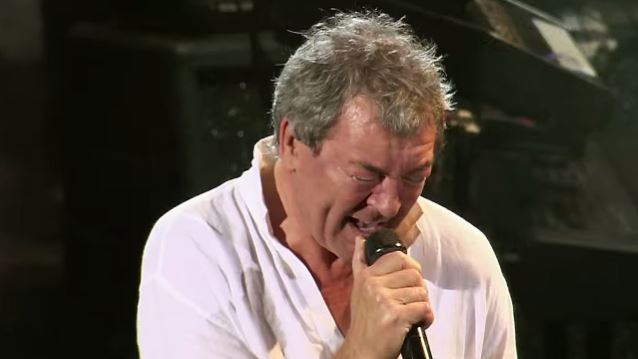 DEEP PURPLE's IAN GILLAN On ROCK AND ROLL HALL OF FAME: 'Who The Hell Wants To Be In An Institution?'

Singer Ian Gillan of legendary British hard rockers DEEP PURPLE — who have been eligible for induction into the Rock And Roll Hall Of Fame for two decades now — says that he doesn't care if his band ever gets the nod, explaining that the people who run the Hall Of Fame organization don't "quite understand what we are."

Speaking to Chile's Radio Futuro, Gillan said: "Whatever I say about that is gonna sound wrong. But who the hell wants to be in an institution? The Hall Of Fame thing, it's an American thing. We don't have that in England or Germany or Australia or Russia or anywhere in the world apart from America. And it's an institution. What's that got to do with rock and roll? Also, it's run by these old guys who thought that THE MONKEES were America's answer to THE BEATLES. And they called DEEP PURPLE [Laughs]… I don't think they quite understand what we are… They called us one-hit wonders. So I don't know what they were talking about… whether it was 'Hush' or 'Black Night' or 'Strange Kind Of Woman', 'Smoke On The Water', 'Child In Time', 'Knocking At Your Back Door' or one of those one-hit wonders that we were… 'Highway Star'… I just don't know. And I guess the fans don't really understand it except in America. It's no big deal."

DEEP PURPLE was denied entry to the Rock And Roll Hall Of Fame last year — losing out to such artists as American pop singer-songwriter Randy Newman and R&B singer Donna Summer.

METALLICA drummer Lars Ulrich recently told RollingStone.com that he still hopes DEEP PURPLE will eventually get recognized by the Hall. "I'm not gonna get into the politics or all that stuff, but I got two words to say: 'DEEP PURPLE,'" he said. "That's all I have to say: DEEP PURPLE. Seriously, people, 'DEEP PURPLE,' two simple words in the English language. But definitely, NIRVANA is a no-brainer for the first year and I'm glad that KISS is getting the long-overdue recognition that they deserved for everything that they pioneered, and then I got two words, 'DEEP PURPLE!' Did I say that already?"