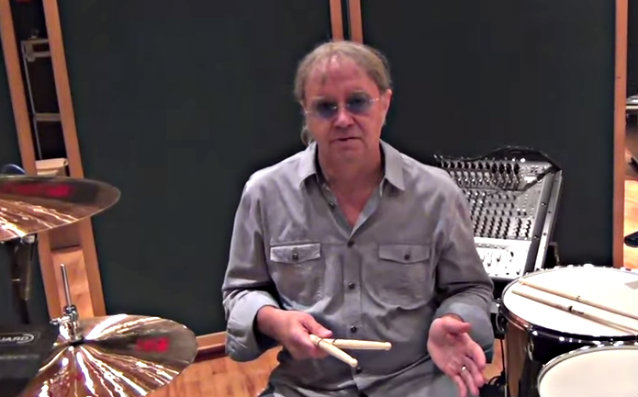 DEEP PURPLE drummer Ian Paice says he believes he no longer has a friendship with the band's former guitarist Ritchie Blackmore — but hopes that he is wrong.

Blackmore and Paice co-founded DEEP PURPLE in March 1968 along with the late Jon Lord, bassist Nick Simper and singer Rod Evans. They played played together until 1975, and then again between 1984 and 1993.

Paice, who hasn't spoken to his former bandmate in years, told the "Classic Rock Show" on TeamRock Radio: "I don't know that he's still my friend. I don't believe it. I don't have anything there that convinces me he's the guy I used to know.

"I don't think Ritchie's changed — I just think he's become a more concentrated version of himself through the years."

He continued: "It's sad because it's unnecessary. I hope I'm wrong. If Ritchie reads this and gives me a call, and says, 'What the hell are you talking about?' I'll go, 'That's fantastic.' But I'm not hanging by the phone."

Asked whether he's tried to maintain communication with Blackmore, Paice replied: "I didn't put the wall up. He knows I've been here for 40 years. He knows who I am. I don't have his phone number; I don't have contact with him. Friends keep in contact."

After Blackmore's final departure from DEEP PURPLE, he resurrected RAINBOW before focusing exclusively on BLACKMORE'S NIGHT, the renaissance-inspired rock band he formed with his now-wife Candice Night. Meanwhile, DEEP PURPLE replaced Blackmore with guitarist Steve Morse, and has been touring ever since, most recently releasing the "Now What?!" album in 2013.

During an interview with RollingStone.com, DEEP PURPLE singer Ian Gillan ruled out the possibility of reuniting with Blackmore for a hypothetical performance at the band's eventual Rock And Roll Hall Of Fame induction. "Well, we are the living, breathing DEEP PURPLE," he explained. "This is the longest that any lineup has ever been together in this band. And it would be unconscionable to think about bringing Ritchie in.

"I don't have an issue with Ritchie, nor does anyone. I've been in touch with Ritchie recently and everything's cool, so there's no bitter, personal problem. We're too old for that and everything's in the past, but no. That would be out of the question. How insulting that would be to Steve Morse, for example? So if that's the stumbling block, fair enough. Never the twain shall meet."

He added: "I'm saying what I'm about to say not to wind Ritchie up, if he's reading this. He knows that we've got to talk about these things. So I say this with no rancor, and let's get the record straight: I was just as much of an asshole as Ritchie was. But Ritchie carried it on for a little longer. Had Ritchie stayed with the band, it would have been all over. It would have just ended. Without any doubt in anyone's mind — it was all over. So the day he walked out was the day we had to rebuild. We had Joe Satriani for one year, and he got us over the crisis, and then we got Steve and started to rebuild. Within a couple of years, we started playing arenas again, and it's been fantastic ever since.