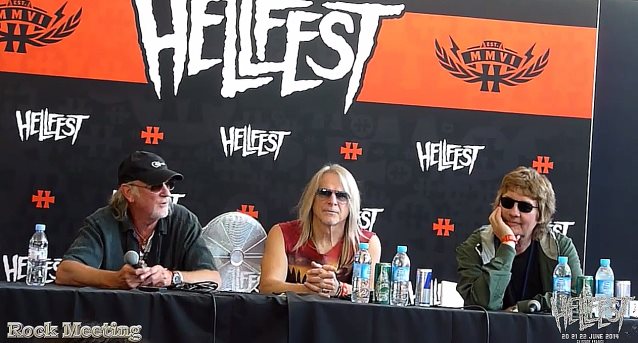 DEEP PURPLE took part in a press conference prior to the band's June 21 performance at Hellfest in Clisson, France. You can now watch the question-and-answer session below.

Asked when fans can expect the follow-up to last year's "Now What?!" album, DEEP PURPLE bassist Roger Glover said: "What happened with 'Now What?!' is we had a writing session in Spain for about a week or so, and then we had another writing session, and then we recorded the album. And it was eight years between albums. We can't live that long to do another eight years, so… We had a writing session a couple of weeks ago in Portugal, and we've got about a dozen rough ideas and jams, some of which will make it. We'll have another writing session later in the year and I think, probably, I don't know when next year, but sometime next year, there'll be another album."

"Now What?!", the 19th studio album from DEEP PURPLE, was released in April 2013 via earMUSIC, the Hamburg, Germany-based international rock label which is part of Edel Group.

The deluxe release of DEEP PURPLE's seminal live album "Made In Japan" was made available in multiple formats on May 19.