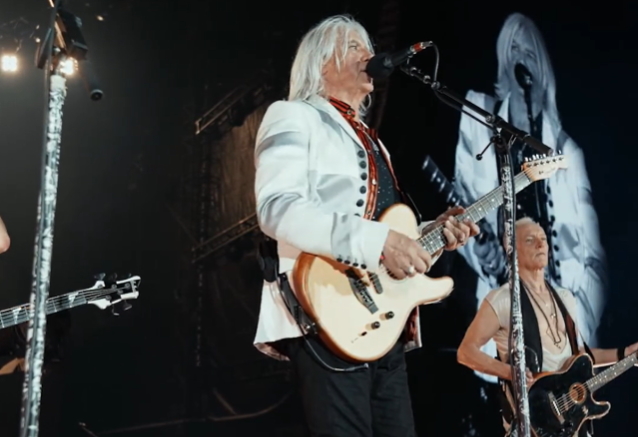 Speaking to the audience at DEF LEPPARD's final "The Stadium Tour" 2022 show in Las Vegas on Friday (September 9),singer Joe Elliott said: "We're gonna dedicate this, because we don't have any songs specifically that refer to the circumstances, but we're gonna dedicate this one anyway to the memory of Queen Elizabeth II, our monarch for [70] years, who passed away yesterday. God bless her. May angels sing her to her rest, as her son said on the TV this morning. For her we'll do this one. This is called 'This Guitar'."

Buckingham Palace confirmed the Queen's death in a statement released on Thursday.

The late monarch will be honored with a state funeral on Monday, September 19 at Westminster Abbey in Central London. The funeral will be followed by a committal at St. George's Chapel in Windsor.

The day of Elizabeth's funeral will be a public holiday in Britain.

The new monarch, King Charles, became king immediately after his mother's death and was officially proclaimed the new monarch at a ceremony on Saturday. At the ceremony, which was held in the State Apartments of St. James's Palace in London, Charles praised his mother's reign as "unequaled in its duration, its dedication and its devotion" added that he hoped to follow her "inspiring example."

"Even as we grieve, we give thanks for this most faithful life. I am deeply aware of this great inheritance and of the duties and heavy responsibilities of Sovereignty which have now passed to me," he said in part.

Queen Elizabeth II came to the throne following the death of her father King George VI on February 6, 1952, when she was just 25.

In February, Queen Elizabeth II became the first British monarch to celebrate a Platinum Jubilee, marking 70 years on the throne.

A dedication to the memory of Queen Elizabeth II 🙏