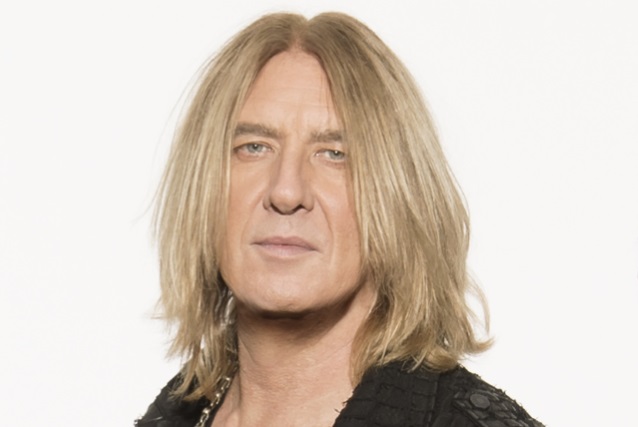 On May 18, Public Television's critically acclaimed conversation series "Speakeasy" will return to New York City's Iridium to film an all-new episode featuring DEF LEPPARD frontman Joe Elliott and Rolling Stone editor David Fricke. Doors will open at 1:30 p.m. and the show will begin promptly at 2:30 p.m. Tickets are available on May 11 at 10:00 a.m. EST here.

Elliott is considered one rock's greatest frontmen. A founding member of DEF LEPPARD, his career began with the formation of the group in 1977. Since then, Elliott's vocals have contributed to the band's signature sound and longevity. Born in Sheffield, South Yorkshire, Elliott spontaneously met the members of a local band called ATOMIC MASS after missing his bus to school. Upon finding out they were both musicians, Elliott joined bandmembers including Rick Savage, and convinced the group to change their name to DEF LEPPARD. The rest is history… The British rock icons recently debuted their full recording catalog worldwide via streaming and download platforms earlier this year and are about to embark on a massive co-headlining tour with JOURNEY this summer.

Aside from his work with DEF LEPPARD, Elliott has worked on several side projects, including a stint on tour with the ROCK 'N' ROLL ALL STARS, a band that consisted of many of rock's most recognized performers, including Gene Simmons, Duff McKagan, Steve Stevens, Glenn Hughes and Sebastian Bach. He also serves as the frontman for the CYBERNAUTS, a David Bowie cover band, formed with DEF LEPPARD's Phil Collen alongside Trevor Bolder and Mick "Woody" Woodmansey of Bowie's legendary backing band, SPIDERS FROM MARS. In 2010, Elliott released an album with his side band, DOWN 'N' OUTZ, which spawned two hits on the Billboard rock chart, including "Overnight Angels".

Elliott currently resides in Dublin, Ireland where he maintains a recording studio in his home called Joe's Garage in which he has recorded and produced many major artists.

"Speakeasy" is the ground-breaking public television series from the producers of "Front And Center" which pairs Rock And Roll Hall Of Famers, Grammy Award and Tony Award winners, and iconic musicians with and interviewer of their choice. The result is an intimate conversation that leads to stories, experiences and compelling viewpoints that may not have been heard before. "Speakeasy" will return to public television for a fourth season fall 2018.