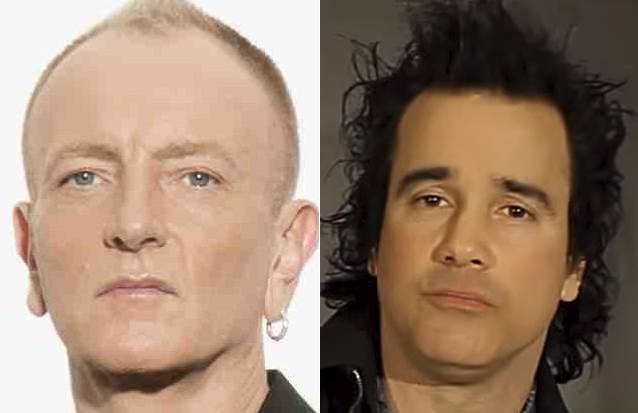 DEF LEPPARD guitarist Phil Collen has left the band's tour with JOURNEY to deal with a family emergency. Replacing him until he returns is TRIXTER's Steve Brown.

Brown made his live debut with DEF LEPPARD on the current tour Friday night (May 25) at the Hersheypark Stadium in Hershey, Pennsylvania. Fan-filmed video footage and photos can be seen below.

Collen and his wife of eight years, Helen, are awaiting the birth of their son this spring.

This is not the first time Brown has stepped in for a member of DEF LEPPARD. He previously subbed for Vivian Campbell at several shows in 2014 and 2015 while the DEF LEPPARD guitarist received treatment in his fight against Hodgkin's lymphoma. Brown's first appearance with DEF LEPPARD took place in September 2014 during the pregame show for the first of three NFL International Series outings.

DEF LEPPARD singer Joe Elliott broke the news of Phil's absence to the Hershey crowd about a half hour before showtime. He said (see video below): "Good evening, Hershey. I am Joe Elliott. Welcome to what should be a great night.

"I have an announcement to make. And I'd like you to spread the word as people come in. But, very sadly, Phil Collen cannot be with us this evening. He has a family emergency back in California. So we are very blessed that our very good friend Steve Brown, who, some of you may remember, stood in for Vivian about four years ago when Vivian couldn't make a couple of shows, has learned the bits very, very rapidly and, with Phil's blessing, will join us on stage tonight. And for the immediate future.

"So just be prepared, okay? We're here for ya, and we're glad that you're here for us. Thank you. See you in 30 minutes."

Asked by Sleaze Roxx in a 2017 interview how the DEF LEPPARD gig came about, Brown said: "Those guys are like family to me. Most people don't know this, but I go back with DEF LEPPARD to about 1988 when they were touring behind 'Hysteria'. Phil Collen is a like a brother to me. When Vivian was diagnosed with cancer in 2013, Phil said to the LEPPARD guys, 'I have the guy that can step in while Viv is undergoing treatment. Let's call Steve.' I was also friends with Joe [Elliott, DEF LEPPARD singer] and I think it helped that he was a fan of one of my other band 40 FT. RINGO. I think he knew I had the voice to do it. I truly believe that I got the gig not because of my ability as a guitarist but more because of my vocal ability. So I got the call in early 2013. I learned the entire set and finetuned my parts and began playing some gigs with them in 2014."

Steve went on to say that "the DEF LEPPARD catalog is not the easiest thing to learn. There's some very intricate guitar parts, very unique guitar parts," he explained. "Steve Clark wrote things in shapes and boxes that I haven't played before. So it was challenging, for sure. I have said this to friends of mine that are guitarists, 'Man, the LEPPARD gig isn't as easy as you think it is.' It was a challenge to dig in and learn the Mutt Lange/DEF LEPPARD collection. They are not your typical cookie-cutter rock and roll band. They have a unique way of writing songs."

DEF LEPPARD and JOURNEY's 58-city tour kicked off on May 21 in Hartford, Connecticut and will run through October 6 in Los Angeles.

Check out these PHOTOGRAPHs! Yes, that is our very own band brother and axeman, STEVE BROWN, filling in for Phil Collen...

Posted by RUBIX KUBE: The Eighties Strike Back Show on Friday, May 25, 2018