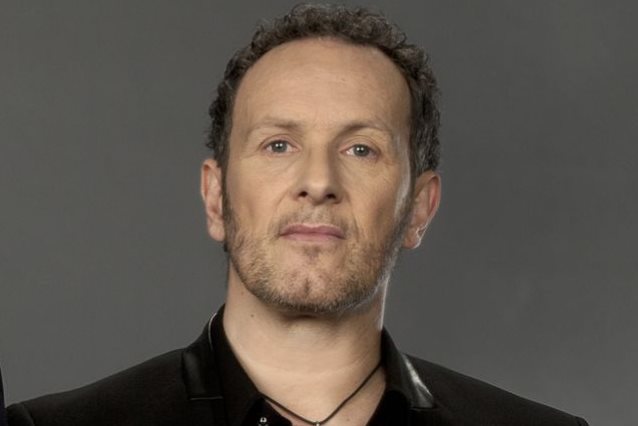 According to Belfast Live, DEF LEPPARD and LAST IN LINE guitarist Vivian Campbell has joined forces with Northern Ireland Hospice to become a celebrity ambassador with the palliative care charity which cares for more than 3,500 adults and children every year.

The 55-year-old, who was diagnosed with Hodgkin’s Lymphoma in 2013, confirmed his new role prior to a concert in London last weekend, where he met with Northern Ireland Hospice chairperson Margaret Butler.

Campbell said: "I've always considered myself to be blessed in my music career and it makes me proud that an organization such as Northern Ireland Hospice recognize this and have asked that I represent what they do. I have personal experience too with my battle with Hodgkin's Lymphoma and I can empathise with patients and families on their journeys. Northern Ireland Hospice is a wonderful organization that I am happy to support and highlight the palliative care services it provides."

Campbell told "Rock Talk With Mitch Lafon" last summer that his battle with Hodgkin's lymphoma was "still ongoing." He explained: "For the last two years, I've been doing a process called immunotherapy. It's part of a Phase II clinical trial. [I've been] taking this amazing new drug called pembrolizumab, which just recently got FDA approved for Hodgkin's lymphoma, which is the cancer I have. And it's a great boon for cancer patients, because, for me personally, I'm one of the very fortunate 20 to 30 percent of the population that have a specific DNA marker — I think it's called PD-L1 — which means that my body actually responds to it. And I know it doesn't work for everyone, but my body responds to it with absolute minimal side effects and I'm able to continue my life and my work — which is a big, big part of the process for me, because if I were sidelined by the disease to where I couldn't work now, I know that it would kill me, because you are what you do and I've always been a musician and I always… That's part of the reason why I keep so busy with all these different projects."

He continued: "Music has always been my lifeblood. To be out there playing guitar, writing songs with great creative people and getting that feedback from an audience is what keeps me going. So I've been very fortunate with this, and, like I said, the drug was just, recently in March [2017], FDA approved, so I'm gonna be able to continue to take it beyond the clinical trial and I get an infusion about once a month and life goes on and it's all good. So, in that regard, I am one of the lucky ones. But I only mention it because I do need to schedule time to do it. Over the last couple of years, I've flown from Singapore to L.A., from London to L.A., from New York to L.A. — I've flown from all over the world to go back to L.A. — to get an infusion, only to go straight from the hospital back to the airport to fly to rejoin the tour. So the most difficult aspect, I've gotta say, in all honesty, has been the scheduling — certainly not the side effects."