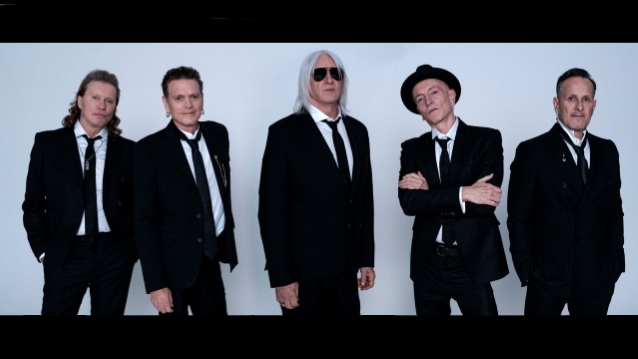 The official visualizer for DEF LEPPARD's new single, "Take What You Want", can be seen below. It is the second single from DEF LEPPARD's upcoming album, "Diamond Star Halos", which will arrive on May 27 via UMe. The follow-up to 2015's self-titled LP is available for pre-order now in multiple configurations, including a deluxe edition, 2-LP vinyl, digital formats and more. Exclusive bundles including newly designed album merch have also launched.

Last month, DEF LEPPARD released "Diamond Star Halos"'s first single, "Kick". The song thrusts into an anthemic stadium-ready frenzy kickstarted with driving guitars and bombastic drums woven into its musical fabric. Meanwhile, the chorus has all the makings of another iconic LEPPARD hit with its skyscraping vocals and melodies the band has become synonymous for.

"It's a stadium anthem, and we were about to go into stadiums," singer Joe Elliott said. "We didn't write it for that reason, but Phil's always trying to write the next 'Sugar' or 'We Will Rock You' or 'I Love Rock 'N' Roll'. We all are, but he actually came up with one, and it's, like, 'Yeah, we've got to do that,' so now it’s a 15-song record."

The artwork for "Diamond Star Halos" is art in itself. The design follows pedigree with their instantly recognizable album covers from their celebrated past. With images by world renowned photographer and director Anton Corbijn, styling concepts by Maryam Malakpour and graphics by the U.K.-based Munden Brothers, the design truly follows the band's influence through their eyes today.

Over the past two years, DEF LEPPARD recorded "Diamond Star Halos" simultaneously in three different countries with Elliott in Ireland, Rick Savage (bass) in England, and Collen, Vivian Campbell (guitar) and Rick Allen (drums) in the United States. Without the pressure of timelines or a fixed schedule, they poured all of their energy into crafting 15 meaningful tracks with a mixture of classic spirit meets modern fire. Thematically, they nodded to their earliest collective influences such as David Bowie, T.REX and MOTT THE HOOPLE, among others. The title itself notably references T.REX's "Bang a Gong (Get It On)". However, they didn't embark on this journey alone. The multi-Grammy Award-winning and legendary artist Alison Krauss lent her instantly recognizable and angelic voice to "This Guitar" and "Lifeless", while David Bowie pianist Mike Garson performs on "Goodbye For Good This Time" and "Angels (Can't Help You Now)".