DEF LEPPARD's new single will reportedly receive its world premiere this coming Thursday, March 17 on BBC Radio 2's "Zoe Ball Breakfast Show". The track is expected to appear on the band's next studio album, which is titled "Diamond Star Halos", according to a tweet from the DEF LEPPARD fan forum Def Leppard Rock Brigade. A new web site, www.diamondstarhalos.com, has been launched, featuring a countdown clock that is scheduled to hit zero at 5 a.m. ET on Thursday, March 17. There are also icons of five members of DEF LEPPARD as psychics. By clicking on each individual icon, fans can hear the respective musician "predict the future."

Last June, DEF LEPPARD singer Joe Elliott confirmed to Cleveland.com that he and his bandmates have been trading ideas virtually during the pandemic and are "ahead of the game" with respect to the new LP's progress. A month earlier, Joe told Download festival host Kylie Olsson that "there's a lot of work to be done" before the completion of the new DEF LEPPARD album. "But we have not let the year go to waste," he said.

Addressing the fact that it had been more than six years since DEF LEPPARD last released album, 2015's self-titled effort, Joe told Download: "The industry being what it is, we're all aware of the fact that there's an element of the media that can't let go of the fact that records aren't that important anymore. And I know that's a sad thing to say, but it's a fact of life. Touring is massively important — way more than it was when you went out promoting records when they were important. Especially for legacy bands or whatever you wanna call 'em. Listen, I went to see THE ROLLING STONES in 1989 in case one of them died. That's 1989. They haven't had a death since the 1960s.

"I'm aware of the fact that when you've got a history — whether it be THE EAGLES or FLEETWOOD MAC or any of the bands from the '80s, like us and [IRON] MAIDEN and whoever else, we've got this legacy audience as well that wanna see us continue the journey, if you like," he continued. "And that's become way more important.

"When we finished that [2015] album, we never really thought about making another record until we just felt the timing was right," Elliott explained. "And we always just fall into place. We're constantly writing songs, so when it comes to piecing songs together, it's not like they're all absolutely brand spanking new, just written, hot-off-the-press stuff. Some of them are ideas that have been percolating for a year or two with a piece missing. And you wait and you wait and you wait, and then you have this epiphany, or one of the other guys goes, 'Why didn't you ask? I've got a bit that would fit in there perfect.' So there's been a lot of that going on. But that's a constant; that's nothing to do with coronavirus. We've been doing it since the 'Def Leppard' album came out, and we will continue to do it, whether we release an album or not. We've got songs in our heads."

The exclusive playback of the NEW DEF LEPPARD S SINGLE is coming on BBC Radio 2 this Thursday (17th) 🤩🤘 The Zoe Ball Breakfast Show, starting at 6.30 a.m. The new album is allegedly called ‘Diamond Star Halo’ according to a US DJ. Exciting times!🎤🎸 @DefLepPod@RockTheseTweetspic.twitter.com/TUGb1TEGDW

According to another tweet it said Alan hunter is reporting that Def Leppard is set to release a new album called diamond star halo. Not sure how accurate that is.

Yes, but it's the bands to release. More Info Thursday. 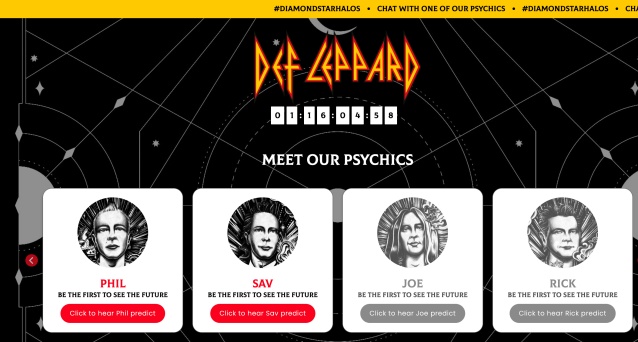