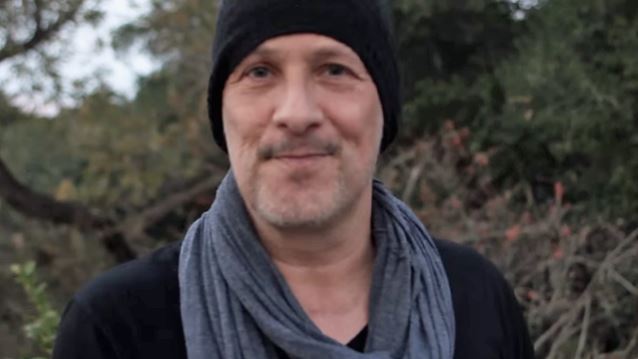 DEF LEPPARD and LAST IN LINE guitarist Vivian Campbell recently spoke to Headlines & Global News about his continuing battle with Hodgkin's lymphoma, with which he was diagnosed in 2013. He said: "I'm still dealing with the cancer; it keeps coming back. It's been three years, I've done three rounds of chemo, stem cell transplant and I really thought would be it with the stem cell transplant, but no, it came back, so I'm kind of resigned to the fact that I'll probably deal with the rest of my life. But I'm really not at all concerned with it; it's just maintenance. I put it on par with going to the dentist. It's a little bit more involved than that, but it's just something that I got to keep doing."

He continued: "I'm one of the lucky ones. I was diagnosed early and have great health insurance and good doctors and I've always been one step ahead of it and I continue to be so and I intend to be so. It's particularly a contrast when you consider that Jimmy [Bain, former RAINBOW/DIO and LAST IN LINE bassist] actually died of lung cancer and didn't even know that he had it. He was dealing with pneumonia for the last month before he died, but it turned out that the pneumonia was brought on by chronic lung cancer. Jimmy didn't even have health insurance. I feel so fortunate that I'm one of the lucky ones. In this country. there are so many people who cannot afford access to proper health care and can't advocate for their own health, and you get these diseases that are so prevalent like all these cancers and you don't even know you have them."

Campbell also spoke in more detail about the treatment that he is currently receiving for Hodgkin's lymphoma. He said: "[I live] in Los Angeles and I'm continuing my treatment at City of Hope, which is nearby L.A., and they're wonderful, wonderful doctors there. I'm currently doing immunotherapy which is the latest and greatest treatment for cancer. It's still part of a clinical trial that I'm a part of. The drugs are that new. I'm actually taking a drug called pembrolizumab, which is the same stuff that cured Jimmy Carter's melanoma recently, so it's actually the shining star of these new courses of immunotherapy drugs. So, like I said, I'm very, very, very fortunate to be able to do this. I actually got great results earlier this week. I did some scans and the results show there's very little cancer activity compared to the last scan three months ago, so it seems to be doing the job, and I'm certainly feeling good, and there's absolutely minimal side effects, so it's a whole different way of treating cancer. It's good."

The former DIO guitarist, who has two tumors in his throat, recently told the Belfast Telegraph the treatment was "holding it in place" and that his doctors believed the tumors may even have reduced in size.