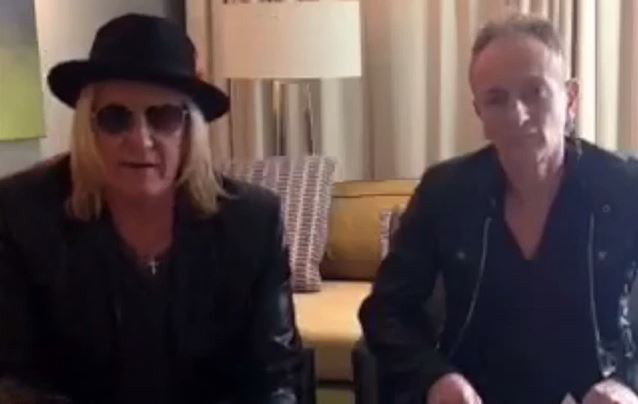 DEF LEPPARD released its new, self-titled studio album on October 30. The effort was made available through earMUSIC worldwide (excluding North America, Japan) in the following formats: CD, 2LP gatefold, digital download and on all streaming services.

On the day of the new album's release, DEF LEPPARD members Joe Elliott (vocals) and Phil Collen (guitar) took part in a question-and-answer session with fans on the mobile app Periscope. You can now see the results of the session below.

The "Let's Go" video can be seen below. Elliott told RollingStone.com about the track: "It's a call to arms, you know? Rick Savage [bass] wrote 80 percent of the song. I wrote the verses, he wrote all the music and the choruses. He came in with it, and we knew it was a classic DEF LEPPARD song. It's that three-minute pop-rock stuff with big chunky guitars and a big chorus. And it has that swaggering, mid-tempo rhythm, like 'Sugar', and 'Rock Of Ages'. The idea was, we wanted something familiar. I mean, when AC/DC comes back after years away, you're not going to get 'Bohemian Rhapsody' from 'em, you know? And you don't want it, either — you want 'Back In Black', or something like it. For us, this is what we do. And it's something we enjoy doing."

Elliott told North Dakota's Grand Forks Herald that the band's new album is a self-titled affair "because that's what it sounds like. It doesn't sound like any one specific era of DEF LEPPARD. It's got everything. You'll listen and you go, 'Oh, that sounds like DEF LEPPARD,' or you'll go, 'That is LEPPARD, but it sounds a bit like LED ZEPPELIN or QUEEN but you can hear the AC/DC or the CROSBY, STILLS & NASH coming through.' We have not shied away from anything that's influenced us in our growing up periods of our life. Just because we've made the kind of music we've made doesn't mean to say we don't like all of this other stuff."