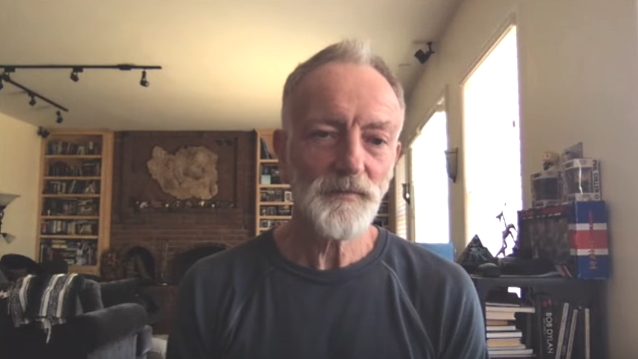 DEF LEPPARD's Phil Collen was recently interviewed by Sweetwater's Nick Bowcott. During the 70-minute chat, which can be seen below, Collen offered his insights on songwriting and arranging, the art of layering guitars and vocals, working with producer Robert "Mutt" Lange, using heavy-gauge strings and metal pickups, Jackson guitars, his pre-DEF LEPPARD years and DEF LEPPARD's multi-million-selling "Hysteria" album.

Asked about his current and upcoming projects, Phil said: "We've [DEF LEPPARD] got some dates booked this year, but it all depends on the vaccine — if they even open the places up; that's what we're waiting on. So we're booked. We're good to go. We're ready to go. I'm at fighting weight. Everything is really cool.

"I'm doing a bunch of other stuff," he continued. "I'm writing with different people, writing with Joe [Elliott, DEF LEPPARD singer]. We've been doing some really killer stuff. And the band is always forward-moving.

"Actually, I've just done an instrumental with Forest Robinson and Craig Martini," Collen added. 'We're waiting to do the video for it. Everyone is having to do their own part for the video. Remember 'Quadrant Four' by Billy Cobham? We've done a metal, drum-bass — a hard rock/punk/jazz fusion [version]… We're just waiting to get the video edited together."

DEF LEPPARD's "The Stadium Tour" with MÖTLEY CRÜE, POISON and JOAN JETT & THE BLACKHEARTS was originally scheduled to take place last summer but has been pushed back to this year due to the ongoing coronavirus pandemic.

"The Stadium Tour" is now scheduled to kick off on June 19, 2021 in Nashville, Tennessee and conclude on September 12, 2021 in San Diego, California.