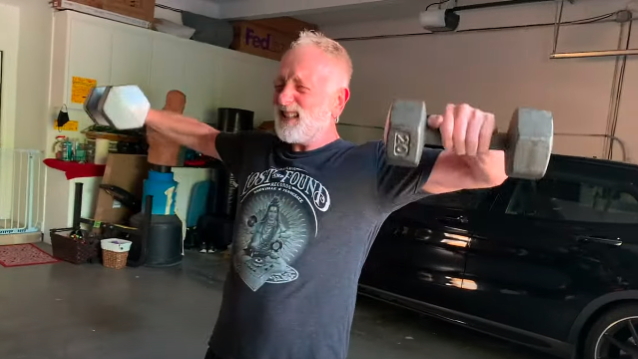 DEF LEPPARD has launched a new video series called "30 Day Fitness Challenge With Phil Collen". Join the guitarist for the month of July as he takes on a 30-day fitness challenge. Use the hashtag #PhilCollen30Days to follow along as Phil works on his exercises, his diet and overall health.

Week three of the "30 Day Fitness Challenge With Phil Collen" is available below.

At 62 years old, Collen is a prime example of the "no-excuse" rule when it comes to being active, fit and healthy.

Collen stopped eating meat in the early 1980s and went vegan in 2011. He told the Los Angeles Times: "I always thought it was a bit weird eating dead bodies even though my parents said it was all right. But I saw 'The Texas Chain Saw Massacre', and that did it. In the movie, they're doing the same thing to people that they do to animals, and so I gradually got off eating meat.... The health thing came way later. Veganism came [nine] years ago, and it was more of a health decision."