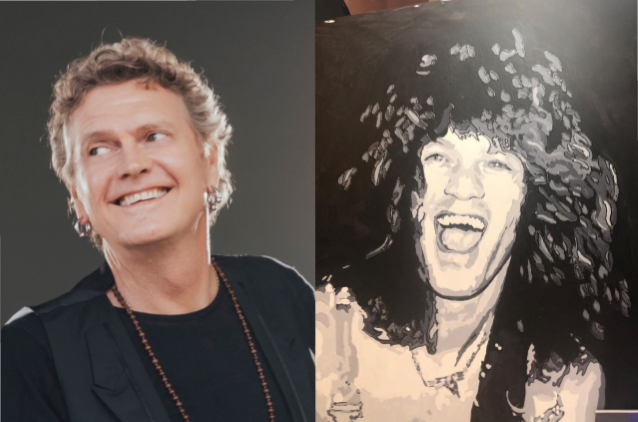 DEF LEPPARD drummer Rick Allen, who has been expressing himself in recent years through his artwork, is working on a painting of late VAN HALEN guitarist Eddie Van Halen.

The Van Halen piece is apparently part of Allen's "Legends" series, which consists of lifelike-yet-impressionistic portraits of musicians who have influenced him, from Jimi Hendrix to Freddie Mercury to John Lennon.

Allen, who started painting at an early age before he ever picked up the drums, posted a picture of his Eddie Van Halen tribute to Instagram, and he included the following caption: "Legend... work in progress".

In a 2018 interview with The Hype Magazine, Allen stated about his use of light or some sort of bright object in his art: "Reality is very difficult to do, but it's my attempt to painting the object or whatever it is. It's a study of how the light bounces off of the object. Some of the more recent pieces — there was one that I did of [late DEF LEPPARD guitarist] Steve Clark; then there was one I did of John Lennon; I did one of Jimi Hendrix, the 'Legends' pieces — that, to me, was a study at how you're really not painting the person's face, you're painting how the light bounces off of the person. If you look closely at some of the pieces, they make no sense when you look at them up close. When you stand back and you start to view it from a distance, it's almost like your mind fills in the blanks and it creates the illusion of reality."

Two years ago, Rick told The Atlanta Journal-Constitution about his artistic process with his paintings: "I take a photograph I really like of the person, and I'll poster-ize it and sketch the poster-ization onto the canvas, and that's when I can come up with my whites, blacks and grays. After I do the under painting, I'll start to choose colors. When I do the 'Legends', I normally listen to the music of the artist I'm painting."

In a 2019 interview with Atlantic City Weekly, Allen stated about his "Legends" series: "I started out with Steve Clark who, was my best friend obviously really inspiring to me, given the music that he left us all with. So I did a painting of Steve and that went over really well. People really liked it. And then I moved on to John Lennon. He has always been a huge inspiration ever since I was a kid. And then I did a Jimi Hendrix which is so cool — I love it. And all of these pieces, when I finally finish making them, I wish I never had to give them up to the gallery. I really wanted to keep them for myself, but, unfortunately, I couldn't."