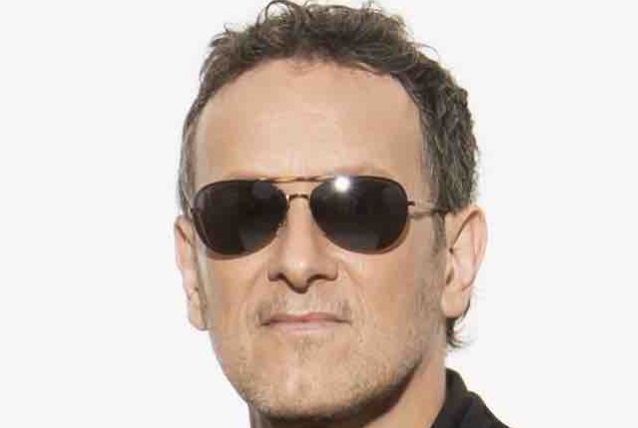 Riccardo Ball of "The Metal Bar" recently conducted an interview with DEF LEPPARD guitarist Vivian Campbell. You can now listen to the chat below.

Asked how the members of DEF LEPPARD remain friends aefter being together for so long, Vivian said: "Well, I think we all know that the band is more important than any individual; that's a given. And there is very much a collective ego in this band. If you witnessed the way that we worked creatively, you'd realize that you can't really have an ego. I mean, if you walk into DEF LEPPARD and you think you've written the world's greatest-ever song, it's very quickly pointed out to you that it's not; I mean, the song is basically pulled apart. But that kind of of stems from the band's work ethic — that good isn't always necessarily good enough; it can always be made better. I think we're probably constantly trying to reinvent the wheel creatively. We kind of do all keep each other in check. It's been very, very much a blue-collar band — always has been. We all kind of grew up in similar circumstances, and we all feel just incredibly thankful to be able to do this and that we've been able to do this for so, so many years. And we don't take it for granted. So we put a lot into our work and we try not to take too much out of it at the end of the day, if you know what I mean."

Campbell also talked about the fact that METALLICA covered "Killing Time" — co-written by Campbell for his pre-DIO and pre-DEF LEPPARD band NWOBHM band SWEET SAVAGE — as the B-side to METALLICA's "The Unforgiven" single. The song was also included on METALLICA's "Garage Inc." covers album.

"Yeah, that was incredibly flattering when that happened," Vivian said. "I do think that there were very, very strong similarities between SWEET SAVAGE and METALLICA. I formed SWEET SAVAGE with a friend of mine who's, unfortunately, long since passed away — Trevor Fleming — back when I was 15. And we were in Belfast, Northern Ireland in the '70s, and it was a very tough environment, but we kind of put our heads down and got into music. And we sound a lot like METALLICA, so in a lot of ways, I'm really not that surprised. But it was tremendous for them to do that. It's funny when you're 15 or 16 years of age and you write a riff and you get together with your mates and it becomes a song, and then, 25 years later, you get a royalty check for it. It's funny how life works sometimes."