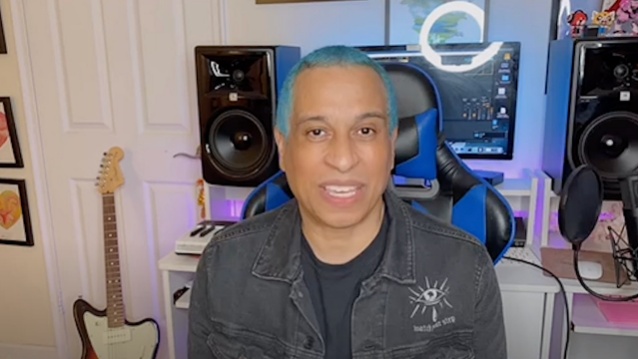 The official Sergio Vega Reverb shop has launched, allowing fans of the DEFTONES and QUICKSAND bassist a chance to purchase basses, guitars, and more music gear from throughout Vega's career.

Gear in the shop includes:

* A Fractal Axe FX-II and Axe FX-II XL+ dual setup, complete with labeled Fractal Foot Controllers, that Vega used for live shows and recording. "They still contain all of my presets and patches throughout the years," said Vega — including ones used for the songs "Diamond Eyes", "Poltergeist" and "Tempest".

* A suite of Fender Jaguar basses from Vega's collection. Said Vega: "These are the basses I've recorded everything from 'Diamond Eyes' to 'Ohm', to 'Interiors' with QUICKSAND as well."

* A collection of Fender Squier Bass VIs. "These are things that I have loved and have been meticulously maintained over the years," Vega explained.

* Tour posters, a wardrobe case, and other road-worn memorabilia.

As Vega continues to build his collection of gear, he's realized that it's time to clean out the studio.

"The only reason I'm getting rid of [this gear] is because I find myself not using them as much, and also as you acquire more gear, you want to make space for that gear," he said.

In a 2021 interview with Bass Magazine, Sergio stated about being in a rhythm section with DEFTONES drummer Abe Cunningham: "It's a joy. We put a lot of effort into being a tight rhythm section. We call ourselves Too Right and we even got matching tattoos. We're very serious about it. Whether we're playing like a traditional rhythm section where I match his kick, or we're interplaying, it's mainly about keeping everything super tight. After a song is written, the final aspect of detailing for me is isolating Abe's drums and playing with them over and over, and making sure I'm locking in with every little thing he's doing. Steph [guitarist Stephen Carpenter] is the same way and he approaches guitar a lot like a bass."

Asked how he finds the space for his bass in DEFTONES's music, Sergio said: "If I'm coming in with a part, then everyone else is fitting in with how they hear it, but if someone else has a part, then it's my job to do that. Stephen and I have a lot of fun matching each other, and we do role bending where he'll play low and very rhythmically and I'll go high on the neck and make it more melodic. A lot of it isn't thought out; it's just what sounds best."