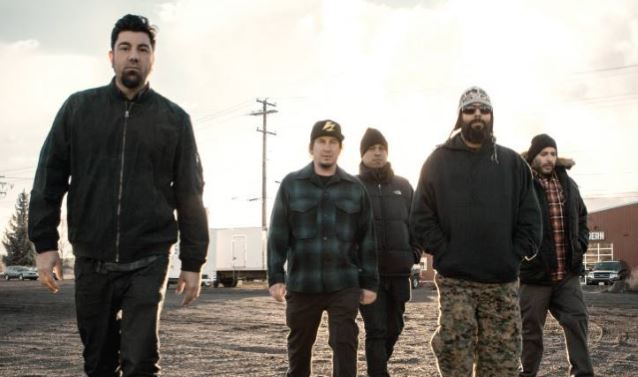 According to The Pulse Of Radio, DEFTONES have chosen "Phantom Bride" as the second single from the band's recently released eighth album, "Gore". The track features a cameo from ALICE IN CHAINS guitarist/vocalist Jerry Cantrell and will impact at rock radio on June 7. The song will follow up the band's first single off "Gore", "Prayers/Triangles", which made it into the Top 10 at rock radio.

DEFTONES drummer Abe Cunningham explained in an interview with North Carolina radio station WXQR how Cantrell came to contribute to the song, saying: "We had this song. It was pretty much done. It could have been left as is, but it sort of had this big kind of a gaping hole in the end, like a gap, that could have just been or we could have filled it up with something… We started brainstorming: 'Man, what if we got someone to play a badass solo on that?'"

Cunningham added: "[Jerry's] a good friend and we just kind of rang him up and he was with it. And he came and hung out with us. And we were barbecuing still, and he joined the barbecue and went in there and he kind of banged it out and it was a lot of fun."

The drummer continued: "[We had] tears of joy when he was laying it down… When he plays, you know immediately it's him, and that's a rarity."

"Gore" came out in April and debuted at No. 2 on The Billboard 200 album chart. It is the band's highest-charting effort since their self-titled fourth album reached No. 2 in 2003.

The first single from the new disc, "Prayers/Triangles", is No. 8 on the rock radio chart.

DEFTONES will be touring Europe throughout June but will kick off a new round of North American dates on July 31 in Buffalo, New York.