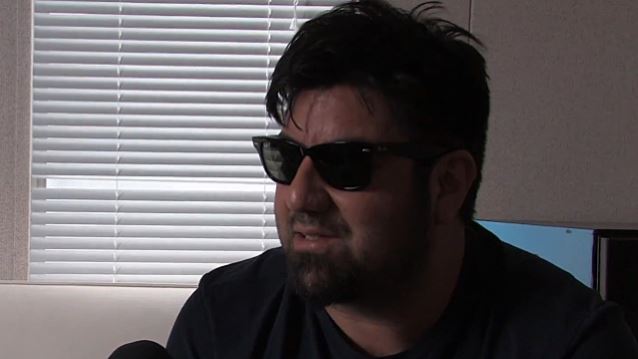 DEFTONES have tapped Jerry Cantrell (ALICE IN CHAINS) to lay down a guest guitar solo on the band's forthcoming album, tentatively due in September.

Speaking to 92.3 KOMP FM hosts Carlota and Sparks at this weekend's Rock In Rio USA festival in Las Vegas, DEFTONES singer Chino Moreno said: "Jerry is on the [new DEFTONES] album. I didn't know if he wanted anybody to know or not. But I guess I've just spilled the beans. But he came in… There's this one track that… in the demo stages of it, I was, like, 'There's this hole in there…'"

Moreno continued: "In DEFTONES songs, there's not really any guitar solos per se, but there was a section in there where [there was room for] not necessarily a typical solo, but it had an area where it could use something like what he does, especially… just his style and the way he plays guitar. So I sent him the track, and then he sent me a demo of it back, like, two days later. So, yeah, when we recorded the song [properly for the album], he came in and laid it down. And it's awesome. It's like you're hearing a DEFTONES song, but all of a sudden, a little bit of ALICE IN CHAINS seeps its way in there, and it's kind of neat. I mean, me, as a fan, I was just sitting back and a little tear came out of my eye."

Moreno also spoke about DEFTONES' general mindset while working on the follow-up to 2012's "Koi No Yokan". He said: "What we try to do, I think, with every record [is] not just follow any formulas that we've sort of learned through making records. Any time something sounds a little formulated, we sort of like to say, 'Okay, well, this is the easy way. We know this works. But why don't we try this?' And just doing so, it kind of keeps it interesting, I think, for us. The challenge of going into the unknown is what makes it fun for us to still make records."

Chino recently told RollingStone.com about the DEFTONES' next CD: "The songs are amazing, and we wrote them in a really cool way. We had all of us in a room together with one person expressing an idea and another person jumping on it. The songs are really built as a collective. We have five guys who have almost completely different takes on music, so when it works, it works great."

According to Moreno, sixteen songs were written for the new album, which was once again produced by Matt Hyde (SLAYER, CHILDREN OF BODOM, MONSTER MAGNET, WINDS OF PLAGUE).

"I think it's a little more of a heady record," Moreno said when asked how the DEFTONES' new material compares to that on "Koi No Yokan". "I feel like we've gone into the songs and really dissected them. If something sounded a little straight, we took a left turn and made things a little screwy. We just tried something completely opposite, not to sabotage it, but to challenge ourselves and try new things that we haven't done in the past.

"It definitely feels like we've taken a step from our last record," he continued. "But it's definitely a DEFTONES record, and it has all the elements that make us who we are. We're not going out there to change anything, other than just thinking outside the box."