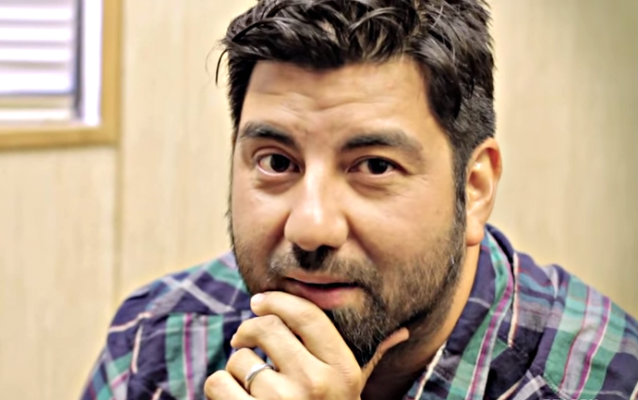 TEAM SLEEP, the side project of DEFTONES frontman Chino Moreno, will enter the Applehead Recording studio in Woodstock, New York this fall to begin work on its long-awaited sophomore album for a tentative early 2015 release.

TEAM SLEEP said in a statement: "For a long time, business people, logistics, careers, adulthood, families and the House Republicans have thwarted us, but we've continued to make music. At the same time, the creative process has become increasingly fragmented and dehumanized.

"With that in mind, we're very excited to get together with our dear friends, hang out, play music and have a unique experience in a beautiful place."

TEAM SLEEP is inviting fans to participate in some of the studio sessions for the album by offering a number of incentives, including a CD featuring previously unreleased music, a listening party to hear new material the band is working on, an in-studio experience with a question-and-answer session as the band works on and records new songs, and a live performance featuring new and old songs. More information is available at BrownPaperTickets.com.

TEAM SLEEP's self-titled debut album was released in May 2005 through Maverick Records.

In a February 2014 interview with SPIN.com, Moreno spoke about the head-butting with labels that surrounded the release of TEAM SLEEP's first CD.

"I used to get a lot of shit for [getting involved in side projects], starting with when I wanted to do TEAM SLEEP. That project in particular was really just this under-the-radar, lo-fi thing — the record itself was really just recorded on a four-track. At the time, Maverick was like, 'The only way you're going to put this out is if you put it out through us.' They ended up taking it, but they started trying to control it.

"That was coming off the 'White Pony' record, which was DEFTONES' most successful record. So they were like, 'Well, you can't just put this demo quality-sounding stuff out.' They shut me down right there — they were like, 'You need to go in with this producer….' I kind of tried it a little bit, we tried re-cutting the record. Through all that, it sort of took the wind out of the sails for me for that project. Which eventually led to me losing interest in it, sad as it is, because I really love playing with those guys, and they're still my great buddies. It just stopped being fun and eventually faded away, and I went back to making DEFTONES records."