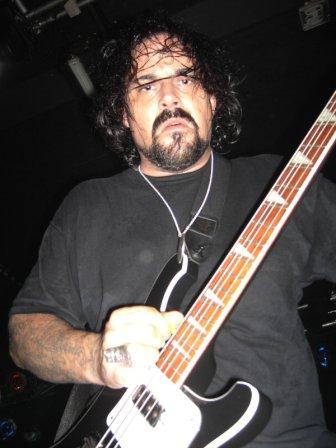 DEICIDE frontman Glen Benton was "hammered and/or stoned out of his mind" during the band's headlining performance on the first day of the Aalborg Metal Festival 2005 in Aalborg, Denmark last Friday (Nov. 4),resulting in "one of the most embarrassing performances I've been witness to," according to one review. What follows are several review excerpts focusing on DEICIDE's appearance at the festival, which included additional performances by THE HAUNTED, HYPOCRISY, SIX FEET UNDER, HATESPHERE and CALLENISH CIRCLE, among others:

"Next up is this evening's headliner, DEICIDE. As I write these lines, I’m still shocked by the embarrassing performance of Glen Benton.

"Benton not only decides to begin the gig before scheduled, he is also obviously hammered and/or stoned out of his mind. This turns out to be if not the, then one of the most embarrassing performances I've been witness to, as Benton babbles about him getting rid of the two Nazis, the Hoffman brothers, about the pain he went through, and in between these rants, he does his best to insult the crowd. He also manages on two occasions to forget that he had already played songs.

"You can only feel sorry for a talented person who has fallen so deep. Here and there you can hear what made DEICIDE great, but on this evening we hear too little DEICIDE music and too much self indulging crap from Mr. Benton.

"DEICIDE only needs one more replacement before being able to move on and create some of the music that helped shaping death metal: get rid of Glen Benton, for fuck's fuck — he just wasted one hour of the life of 400 individuals in Aalborg, and it's probably not going to be the last."

”I was really looking forward to seeing Benton and Co. hit the stage, but when the bandmembers are so drunk that they hardly can stand, my respect is gone. Everything they ever did to become the reigning kings of death metal totally fell to the floor here. What was supposed to be my first DEICIDE concert — something I HAD to experience and had looked forward to in a long time — was totally destroyed. A guy next to me mentioned that this was not a death metal concert — but rather a circus performance at a dirty local bar, and DEICIDE were the clowns!

"With this in my mind, the concert was hysterically funny. Especially when Glen tried to kick one of the stage guards in the head, but hit a monitor instead, resulting in two monitors ending up on the floor. The vocalist of SIX FEET UNDER [Chris Barnes] was also onstage for some screaming with Glen & Co. but ended up taking the microphone and saying in an almost mocking voice, 'This is getting out of control.' And that was more or less the key word for this concert. Especially when Benton couldn't even remember what track the band just had played and started on the same track again. A total joke!"

"Glen Benton was definitely not ready to go on stage. [He was] not in shape, [and was] drunk, stoned… whatever… he should not have done it. 'Cause he had a really hard time remembering the lyrics, what songs he already played as well as the tracks he was supposed to play. All in all, a really embarrassing performance from a person who should know how to behave. But it was a shame since a lot of people had been travelling a long way to see DEICIDE."