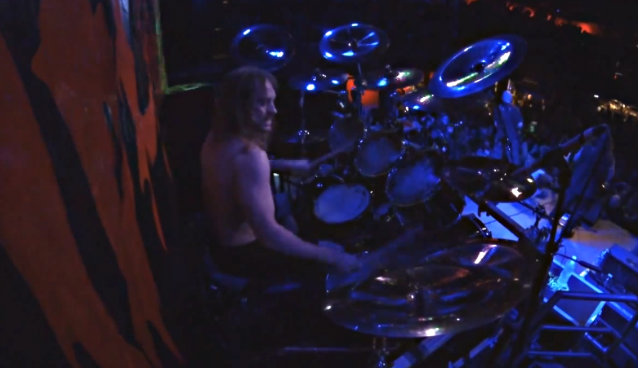 DEICIDE: 'Scars Of The Crucifix' Drum-Cam Footage From San Francisco

Sick Drummer Magazine has uploaded drum-cam footage of DEICIDE's Steve Asheim performing the song "Scars Of The Crucifix" on October 18 in San Francisco, California. Check it out below.

DEICIDE's latest album, "In The Minds Of Evil", sold 2,600 copies in the United States in its first week of release. Issued on November 25 via Century Media Records, the follow-up to 2011's "To Hell With God" was recorded at AudioHammer Studios in Sanford, Florida with producer Jason Suecof (TRIVIUM, AUGUST BURNS RED, THE BLACK DAHLIA MURDER, ALL THAT REMAINS, WHITECHAPEL, DEVILDRIVER).

The cover artwork was taken from Australian artist Simon Cowell's painting Power Of The Mind, and offers a fitting face to the album's 11 tracks.

Steve Asheim recently told Decibel magazine about the band's working relationship with Suecof: "It's awesome! I've known Jason since '08. I had been going out to do the ORDER OF ENNEAD records with him. The last DEICIDE record we did with Mark [Lewis], but I've known Jason a long time, so I asked him if he was into it. He said, 'Absolutely!' I wanted to get one done with him before something happens. You never know."