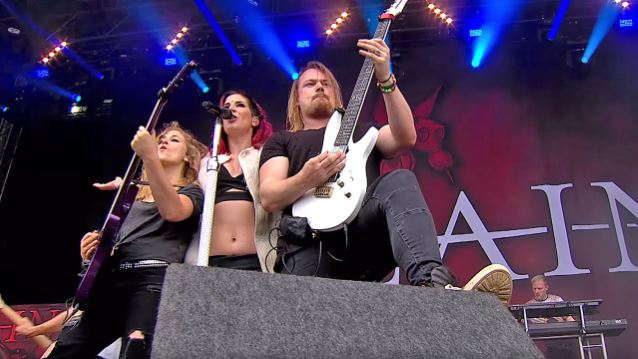 Dutch symphonic metallers DELAIN have completed work on their new studio album for a late summer release. "The mixing is done, the mastering is done. We're just finishing the artwork now, and then we've got it all together," DELAIN singer Charlotte Wessels told TotalRock at last weekend's Download festival (see video below).

The CD, which will contain a cover version of an as-yet-undisclosed song, will be supported by a European headlining tour in the fall, including a U.K. run of dates in November.

As previously reported, DELAIN will celebrate its tenth anniversary with a special show in Amsterdam on December 10 that will also be recorded and filmed for a release on CD, DVD and Blu-ray.

DELAIN released a new EP, "Lunar Prelude", on February 19 via Napalm Records. Mastered by Grammy Award-winning engineer Ted Jensen, the set offered two brand new songs in the shape of the catchy "Suckerpunch" and the melancholic "Turn The Lights Out". "Don't Let Go" (taken from 2014's "The Human Contradiction") came in a brand new version, while the EP also contained four live cuts, as well as an orchestral reprise of "Suckerpunch".

DELAIN recently announced the addition of guitarist Merel Bechtold to the group's ranks.