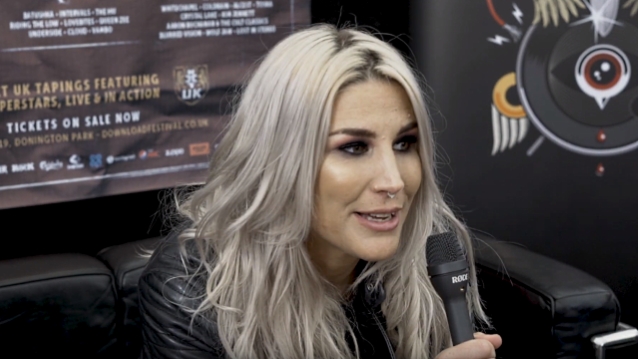 DELAIN's Next Album Will Be 'Really Big And Bombastic'

DELAIN frontwoman Charlotte Wessels spoke to U.K.'s Ticketmaster about the musical direction of the band's next album, tentatively due in early 2020. She said (see video below): "The music on the new album is going to be really big and bombastic. I think it's going to be more symphonic as a whole and more uptempo as a whole."

Charlotte continued: "I think that over the years, the music that we've written has become more and more suitable to perform live, which is kind of logical, because we've been going on and offstage and writing in between, so also when you're writing, you're more in the mindset of imagining ourselves live on a stage and playing this."

DELAIN's latest release was "Hunter's Moon", which came out in February via Napalm Records. The effort consisted of new studio tracks accompanied by a live Blu-ray from the band's sold-out "Danse Macabre" 2017 European tour.

"Hunter's Moon" is the final in the trilogy, and follows on from DELAIN's EP "Lunar Prelude" and the full-length album "Moonbathers".

Last week, guitarist Merel Bechtold announced that she was leaving DELAIN to focus on different musical ambitions. Her final performance with DELAIN took place on June 23 at the Graspop Metal Meeting in Dessel, Belgium.