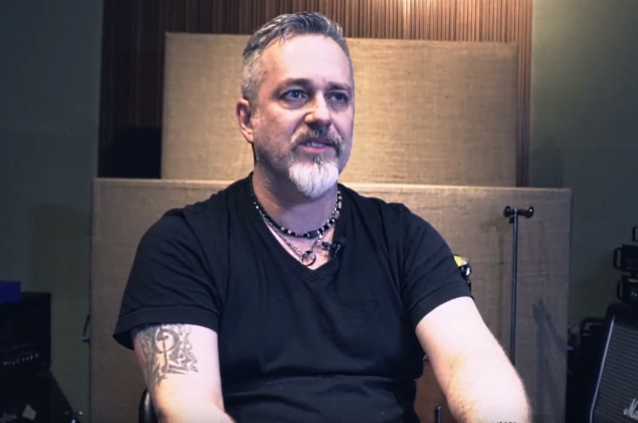 Bassist Dennis Ward has left PINK CREAM 69, the band he has played with for more than three decades.

He wrote: "Attention all PINK CREAM 69 Fans! It's time that I make the official announcement of my departure from PINK CREAM 69.

"I've had a wonderful time over the past 32 years meeting so many fans and making music with fantastic people.

"I want to thank all the guys, Alfred, Dave, Uwe and Chris, for the years of fun and adventure. I hope that they continue to carry out the legacy of PC69 and I wish them many great concerts and musical experiences.

"This departure is in no way a spontaneous decision. Many of you might have noticed that I have not performed with the band (other than a couple of shows) over the past few years. Fortunately Roman Beselt was able to step in for me often.

"I had been contemplating my departure for awhile now but have held on for no actual reason other than to not make any waves.

"My decision has nothing to do with my other activities; performing with Gus G, joining MAGNUM or my studio work as a producer/engineer. I have no hard feelings towards anyone in the band either, I just wasn't enjoying the very few shows we've had the past few years and quite simply did not feel comfortable on stage anymore. I hope that will be reason enough for anyone curious.

"So let's all wish the guys a great future and please continue to support the band as much as possible!"

A few weeks ago, Ward spoke about his status with PINK CREAM 69 while he was in Greece playing with Gus G. At the time, he told Rockpages TV (see video below): "Today PINK CREAM exists, but it doesn't. It's there. We play two or three shows a year, maybe. So we're still there. We made a record not long ago [2017's 'Headstrong'], which I'm a little unhappy we did so little 'cause, I was really, really, really happy with the last record, and we did nothing to promote it — nothing. One short tour and that was it. Which bothered me, to be really honest. And I expressed my feelings to the band and said that I wanted to do more and I don't think there's a shot to come farther unless we work on it. We played our little tour, and that was pretty much it. But the guys also expressed to me that they're not interested in doing many shows and they're happy with it like it is. And I said, 'Okay, that's fine. It's your choice. Absolutely. No problem.'

"There's no life in PINK CREAM right now," he continued. "There's nothing to lose. We have no loss. It's not like the band fell apart and [it's such a] sad story. Nothing like that. It just sort of slowly dissolved, like bubbles in your beer. It's still a beer, but it has less bubbles. Like I said, the band has told me — they were vocal about it that they don't wanna do too much, because they're happy with the way things are, and I have to accept that. What I don't enjoy at all is like, for example, here [in Greece] playing with Gus… Originally, we were supposed to be here for one show, and I said to Gus, 'You know what? After three months of a break and then playing one show, it's kind of a pain in the ass. 'Cause I prepare well. And I don't wanna prepare well for one show and then just go home. So we arranged three shows — thank God — and it makes it all worthwhile.

"PINK CREAM is still playing a show here; half a year later, another show... I'm not into it, 'cause I know that that show is not gonna be as good as I want it to be, and I'm not in the mood to do that anymore. So, I told the guys I think it'd be a good idea to get someone to replace me in this situation. I'll be there — if you wanna do some touring, some real stuff, I'm ready to go. If not…

"There is no emotion in PINK CREAM right now," he added. "There is nothing there that's fighting to stay alive. Okay? It's individual people that come together to make PINK CREAM every now and then… It's sad, but it is what it is. That's why I keep doing my thing and working with people like Gus, so that I can still have my life as a musician, because I still enjoy doing it and I wanna keep doing it. And if I can't do it with my own band, then I'll do it with somebody else's. No problem."

PINK CREAM 69 was founded in 1987 by singer Andi Deris, guitarist Alfred Koffler and drummer Kosta Zafiriou, who were later joined by Ward. Deris left the band in 1994 and after auditioning various singers was replaced by Englishman David Readman. In 2001, news emerged that Koffler suffered from focal dystonia, a serious disease that affected his left hand and his playing. For their live shows, the band recruited second guitarist Uwe Reitenauer to help out Alfred on stage, and he would eventually become a full-time member. Drummer Chris Schmidt would later step in after the departure of Zafirou in 2012.

It’s time that I make the official announcement of my departure from Pink Cream 69....