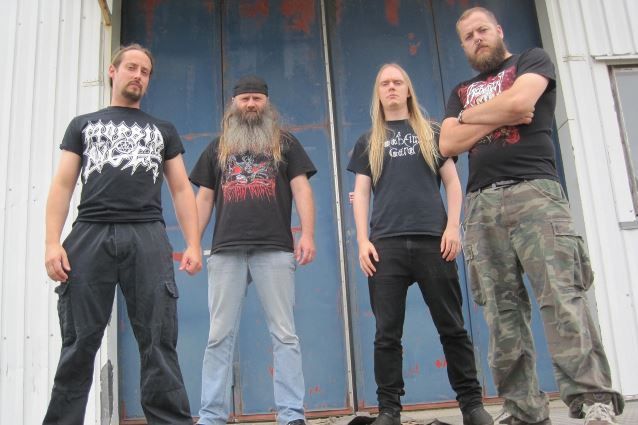 DERANGED: Listen To Rough-Mix Version Of New Song 'Hello From The Gutters'

Long-running Swedish death metallers DERANGED are currently at Berno Studio (AMON AMARTH, THE CROWN, WITCHERY) recording what will be their ninth full-length album and first for Agonia Records. The follow-up to 2011's "Cut Carve Rip Serve", titled "Struck By A Murderous Siege", will be released on October 28.

A rough-mix excerpt from one of the new songs, "Hello From The Gutters", accompanied by a video from the studio, can be streamed below.

While full album details will be revealed over the next weeks, drummer and founder Rikard Wermén issued the following update on DERANGED's current proceedings: "We're right now caught in good ol' Berno Studio located in our hometown Malmö, working on the new full-length titled 'Struck By A Murderous Siege' and things are going rather smooth. We record the way we've done the last 20-plus years. We go in and just fucking play. That's it! Not trying to overproduce anything. We want our shit to sound alive and (in)human. Eight songs of adrenaline- and filth-soaked death metal straight from the sewers of a cruel and malicious world."

DERANGED was formed in 1991 by a couple of bored teens in the southern parts of Sweden who basically wanted to do something in their sparetime. Inspired by the bloodiest and most violent bands of the period, like early CARCASS, NAPALM DEATH, IMPETIGO, SUFFOCATION, and even bloodier horror movies, they started to grind. The early fascination proved to be a particularly long-lasting and fruitful one, with a short break between 2007 and 2009.

DERANGED is led by Wermén, who's the band's mastermind and sole remaining member from the original 1991 lineup.